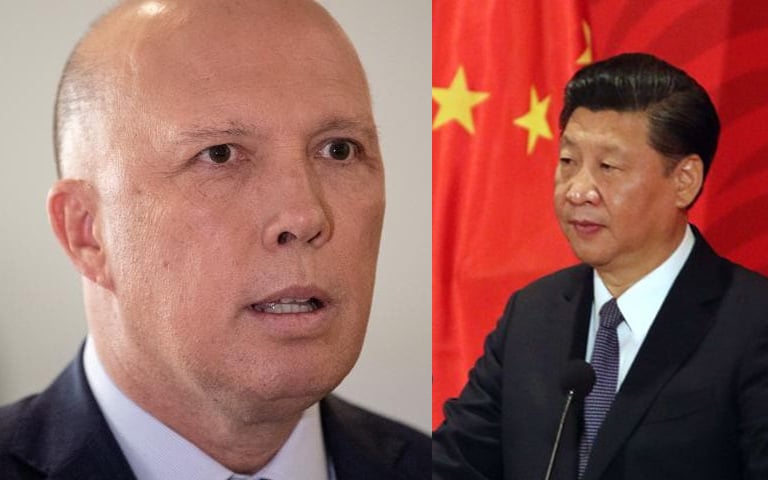 For the first time since he found himself on the losing end of two leadership spills in one week, The Minister Of Home Affairs has this week bitten off more than he can chew.

The Minister in charge of incarcerating refugee toddlers who are losing their baby teeth due to lack of natural sunlight and poor nutrition, appears to have accidentally picked on someone bigger than him.

The Communist Party of China, also known as China, has remained horrifyingly silent regarding the controversial comments made by the Member for Dickson – in which he suggested that President Xi Jinping’s government is ‘inconsistent with Australian values’.

“Our issue, as I’ve said before, is not with the Chinese people, not with the amazing Chinese diaspora community that we have here in Australia [that take me to amazing lunches in Sydney’s Chinatown and grease me up to fast-track visas for foreign Liberal Party donors].” said Dutton.

“My issue is with the Communist Party of China and their policies to the extent that they’re inconsistent with our own values.”

It is not yet known what Dutton means exactly when he says ‘our own values’ considering his party’s rapid backflips on just about any political issue which change in accordance to whatever our nation’s conservative talkback radio hosts are feeling on any given day.

Both Liberal and Opposition parliamentarians appear to be confused by these harmful comments, considering the fact that the Government has spent the last month defending Gladys Liu MP’s well-documented ties to the Chinese Communist Party

Given the current humanitarian crisis happening in the Xinjiang region that has seen China detaining thousands of Uygyur Muslims for ‘re-education’ – Dutton’s Liberal colleagues actually thought Peter Dutton would have realised he had a bit more in common with the burgeoning world power – given the fact he has spent the better part of the decade overseeing similarly inhumane concentration camps in Manus and Nauru.

However, Dutton has this week made the bizarre error of firing shots at someone much more important and powerful than he is – an unexpected break from his routine of dehumanising war-weary asylum seekers and African teenagers in Melbourne.

Like must of Dutton’s endless list of diplomatic and administrative errors, his criticisms of China have been meet with complicity from the Prime Minister – who only reprimand his members for these kinds of economy-destroying gaffes if they come from leftist war heroes like Andrew Hastie MP.