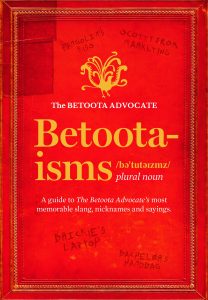 Betoota-isms is a deep dive into Australian culture, invention and creativity with a complete record of ‘English’ as it is used from the Member’s Box of the MCG to the change rooms of the Betoota Dolphins Rugby League Football Club.Discover the meaning of the Michelle Pfeiffer (the Pfizer). Identify, with confidence, our nation’s leaders: Scotty from Marketing, Dictator Dan and Hot Mess Gladys. Ask your mate to pick you up a ‘bachelor’s handbag’ and some bread rolls on his next run to Coles. From the heart of the Western Queensland Channel Country, Australia’s oldest and favourite newspaper details our country’s very rocky start to a new decade that was supposed to be one of great optimism and innovation.

2020 was meant to be our year of healing. A time to tend to the wounds of a country torn asunder by a decade of divisive political and media debates. A lack of confidence in the international sporting arena. A 24-hour news cycle that has destroyed the pub test.
We thought all of the uncertainty was behind us. The federal election delivered us Scotty from Marketing. The Quiet Australian spoke up. Gay marriage? Yep. Climate change? Let’s wait and see what happens. Smudge and Warner had served their time and, together as a nation, it was time to rebuild.
But fate had other plans, starting with the worst bushfires in human memory. While large swathes of the country burned, our politicians were either on holidays or giving their mates grants to build indoor pools in blue-ribbon seats. Surely, it couldn’t get worse.
‘ken oath it could. Mother nature arrived as COVID-19, and told us all to go to our rooms. 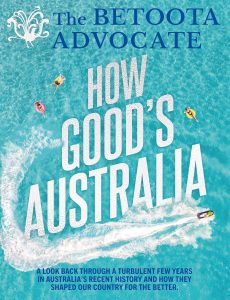 Australia’s oldest and favourite newspaper dissects the last decade of political turmoil and cultural frustrations that turned us all against each other, and how we broke down those walls of division to come together again. This is our country’s coming of age story. How good.

It’s been a tough few years.

We’ve had three prime ministers in four years, a scandalous ball-tampering scandal, our own #Metoo moments (Defamation laws apply*), the Murray-Darling fish kills and, worst of all, the cancellation of both the NRL and AFL footy shows.

In this penetrating and incisive book, The Betoota Advocate‘s editors Clancy Overell and Errol Parker take us on the nation’s journey through chaos and confusion, to the start of a new era.

Finally, we as a nation have been gifted the rare opportunity to choose who leads our country for an entire federal term. Our cricketers now use talent and skill to win matches. The culture wars are over, and common sense prevails.

With a sensible Liberal government, a charismatic PM and a united, strong and experienced cabinet of some of our nation’s greatest minds in place, we are well on the road to economic stability and environmental renewal.

Join Australia’s most trusted newspaper from the remote but vibrant town of Betoota, as we detail the last four years in news – how bad things got, and how lucky we, as a nation, have been to survive it all. A relatively comprehensive guide to the Great Southern Land by Australia’s oldest newspaper. Now in its 11th edition, this full-colour guide to contemporary Australia has been touted as the most comprehensive insight into the lucky country since Microsoft’s Encarta. Initially written for those venturing for the first time beyond Betoota’s city limits, Betoota’s Australia has become the go-to bible for anyone looking to uncover the real Australia behind the headlines.

The places, the people, the politics, the language, the sport and much more are here perfectly articulated by what is arguably our country’s oldest newspaper, The Betoota Advocate, which can boast more readers than The Australian.

It’s the type of quality publication we’ve come to expect from a news organ never hamstrung by editorial standards and features pictures, profiles and fairly up-to-date maps, as well as some frankly incredible facts and stats. Compiled by the paper’s editors – former News of the World deputy editor Errol Parker and the home-grown Clancy Overell – Betoota’s Australia brings the Great Southern Land to life. 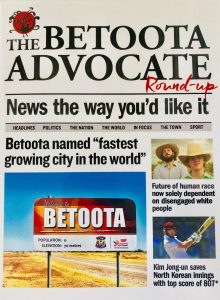 Since venturing online in 2014, it has quickly become a player in online ‘news’ and entertainment, punching far above its weight, given not a word of it is true, and it was launched by three young blokes with not much more than a laptop and a distinctively larrikin Aussie humour.

Several of its so-called ‘news’ stories have been reported as fact by major news services, including Channel Nine, which reran the story of a parking policeman who booked himself, and radio 4BC, which re-reported the story of 78-year-old Reg ‘Slim’ Flynn, a former prize fighter who took out three would-be home invaders.

Now it’s time to bring together the Betoota’s best stories with a host of new material, including news, sport, human interest, crosswords – even the classifieds – in an inhale-on-Christmas-day-and-make-your-drunk-uncle-laugh collection.