After taking a step back from politics, losing over fifty kilos and taking back full control of his official Facebook page, former Federal politician Clive Palmer seems to be in a good place.

In October last year, the leader of the Palmer United Party began posting lyrics to The Beatles – a refreshing change from the highly political status updates that have been dominating his timeline for many years now.

Clive has also shared his very vague but very patriotic sentiments across social media, in a watered-down Trump-esque style of nationalism.

Clive Palmer has also used social media to criticise the puppets he left behind in federal politics.

and has made a point of calling out his long-standing enemies within the lying Australian media.

But today, Clive Palmer showed another side to his Dark Horse character.

A deep-seeded love and respect for the early-mid nineties brand of West Coast rap music, also known as G-Funk.

“I just love the synths they used back then. Really gets me hot under the collar. I reminds me of when I was getting down with some Beenleigh Rum and Noosa kush back when I was just starting out in the Real Estate game” Clive told The Betoota Advocate this afternoon.

“Snoop, Dre, even a bit of Eazy… It’s pure nostalgia for me. And it helps motivate me to crush my enemies. Like the lying media” 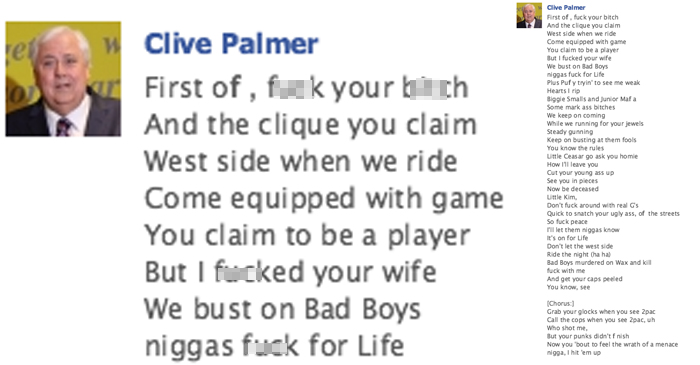 “Tupac was very good at that. I miss him greatly”

When asked if Clive had any other favourites from that era, he informed our reporters that he’s not shy of a ‘bitta slow jammin”

First off, fuck your bitch and the clique you claim
Westside when we ride, come equipped with game
You claim to be a player, but I fucked your wife
We bust on Bad Boys, niggas fucked for life
Plus Puffy trying to see me, weak hearts I rip
Biggie Smalls and Junior M.A.F.I.A. some mark-ass bitches
We keep on coming while we running for your jewels
Steady gunning, keep on busting at them fools
You know the rules
Lil’ Caesar go ask your homie how I’ll leave you
Cut your young ass up, leave you in pieces, now be deceased
Little Kim, don’t fuck around with real G’s
Quick to snatch your ugly ass off the streets
So fuck peace! I’ll let them niggas know it’s on for life
Don’t let the Westside ride the night haha
Bad Boy murdered on wax and killed
Fuck with me and get your caps peeled
You know

Check this out, you motherfuckers know what time it is
I don’t know why I’m even on this track
Y’all niggas ain’t even on my level
I’m going to let my little homies ride on you bitch-made ass Bad Boy bitches
Take money

Get out the way, yo, get out the way, yo
Biggie Smalls just got dropped
Little Moo’ pass the MAC and let me hit him in his back
Frank White needs to get spanked right for setting traps
Little accident-murderer, and I ain’t never heard of ya
Poisonous gats attack when I’m serving ya
Spank you, shank your whole style when I gank
Guard your rank cause I’ma slam your ass in the paint
Puffy weaker than the fuckin’ block I’m running through, nigga
And I’m smoking Junior M.A.F.I.A. in front of you, nigga
With the ready-power
Tucked in my Guess under my Eddie Bauer
Your clout petty/sour, I push packages every hour
I hit ’em up

Peep how we do it, keep it real as penitentiary steel
This ain’t no freestyle battle
All you niggas getting killed with your mouths open
Trying to come up off of me, you in the clouds hoping
Smoking dope, it’s like a sherm high
Niggas think they learned to fly
But they burn, motherfucker, you deserve to die
Talking about you getting money, but it’s funny to me
All you niggas living bummy, why you fucking with me?
I’m a self-made millionaire
Thug livin’, out of prison, pistols in the air haha
Biggie, remember when I used to let you sleep on the couch
And beg a bitch to let you sleep in the house?
Now it’s all about Versace, you copied my style
Five shots couldn’t drop me, I took it and smiled
Now I’m back to set the record straight
With my AK, I’m still the thug that you love to hate
Motherfucker, I’ll hit ’em up

I’m from N-E-W Jers’ where plenty of murders occurs
No points or commas, we bring drama to all you herbs
Now go check the scenario: Lil’ Cease
I’ll bring you fake G’s to your knees
Copping pleas in de Janeiro
Little Kim, is you coked up or doped up?
Get your little Junior Whopper click smoked up
What the fuck, is you stupid?
I take money, crash and mash through Brooklyn
With my click looting, shooting and polluting your block
With a 15-shot cocked Glock to your knot
Outlaw MAFIA clique moving up another notch
And your pop stars popped and get mopped and dropped
And all your fake ass East Coast props
Brainstormed and locked

Jui-cer
You’s a beat biter, a Pac style taker
I’ll tell you to your face you ain’t shit but a faker
Softer than Alize with a chaser
About to get murdered for the paper
E.D.I. Mean approach the scene of the caper
Like a loc with Little Ceas’ in a choke
Gun totin’ smoke. We ain’t no motherfucking joke
Thug Life, niggas better be known
Be approaching in the wide open, gun smoking
No need for hoping, it’s a battle lost
I got ’em crossed as soon as the funk is bopping off
Nigga, I hit ’em up!

Now you tell me who won
I see them, they run haha
They don’t wanna see us
Take money
Whole Junior M.A.F.I.A. clique dressing up trying to be us
Take money
How the fuck they gonna be the mob when we always on our job? We millionaires
Killing ain’t fair, but somebody got to do it
Oh yeah, Mobb Deep: you wanna fuck with us?
You little young-ass motherfuckers
Don’t one of you niggas got sickle-cell or something?
You’re fucking with me, nigga
You fuck around and catch a seizure or a heart attack
You better back the fuck up
Before you get smacked the fuck up
This is how we do it on our side
Any of you niggas from New York that want to bring it:
Bring it!
But we ain’t singing, we bringing drama
Fuck you and your motherfucking mama
We gon’ kill all you motherfuckers
Now when I came out, I told you it was just about Biggie
Then everybody had to open their mouth with a motherfucking opinion
Well, this is how we gonna do this:
Fuck Mobb Deep, fuck Biggie, fuck Bad Boy as a staff, record label and as a motherfucking crew!
And if you want to be down with Bad Boy, then fuck you too!
Chino XL: fuck you too!
All you motherfuckers, fuck you too!
(Take money, take money)
All of y’all motherfuckers, fuck you; die slow, motherfucker
My .44 make sure all y’all kids don’t grow!
You motherfuckers can’t be us or see us
We motherfuckin’ Thug Life-riders, Westside til we die!
Out here in California, nigga, we warned ya
We’ll bomb on you motherfucker! We do our job!
You think you mob? Nigga, we the motherfuckin’ mob
Ain’t nothing but killers and the real niggas
All you motherfuckers feel us
Our shit goes triple and 4-quadruple
Take money
You niggas laugh cause our staff got guns under they motherfuckin’ belts
You know how it is, when we drop records they felt
You niggas can’t feel it, we the realest
Fuck ’em, we Bad Boy-killers
We killers, we killers, we killers