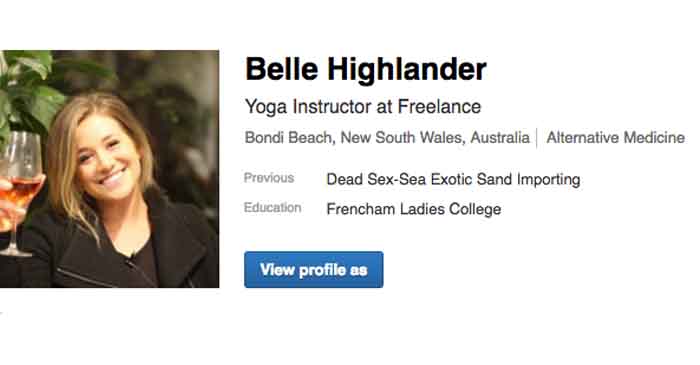 Making the transition from an importer of exotic beach sands, to a freelance yoga instructor, Belle (25) is very quick to notify her professional network contacts that she has changed jobs.

“I just want people to know, that this is what I’m doing now,” says Belle, who currently runs classes out of an investment property of her fathers in the Sydney beach suburb of Bondi.

Among her 1205 contacts, are several people with real jobs. Her Scone-based cousin, Tim (30) says he has no idea what she is doing on Linkedin.

“She writes about six blog pieces a fortnight, Its mostly about Sydney dining,”

“I’m a grain trader… What would I need to be connected to her outside of family events,”

“She’s a fucking Yoga instructor. And I don’t think she works that much.”

A recent survey of LinkedIn users found that very few people actually used the only network as a tool for networking, with most using it as a tool for promotion.

“We have plenty of people like Ms Highlander” says Sean Mulligan, a spokesperson for LinkedIn.

“Hey, why should they have to miss out on being so connected? Just because they don’t have a real job… Or a job at all.”

“The community of LinkedIn blogposts is building by the day”