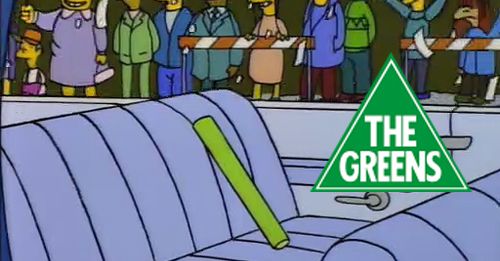 GREENS LEADER CHRISTINE Milne has resigned her position as leader, saying via Twitter that she does not plan to contest the 2016 election.

Feeling optimistic, proud & sad to announce I’m not contesting 2016 election, and so I resign as Leader of Australian Greens

In a statement, the party said Senator Milne had informed Greens MPs and senators on Wednesday morning and a ballot to elect a replacement to take place at 11.30am.

In the wake of these explosive developments, a power vacuum has opened up within the party – with the goals of ridding the “dead ants and chips” from environmental political group.

Many senators have thrown their hat in the ring, with a few frontrunners emerging.

None more so than Dr Inanimate Carbon Rod, the impassioned senator from Western Australia.

Former Greens spokesman turned Judas Peter Garrett, says that the party is looking for somebody with as much personality and charisma as Christine Milne to guide the party for the coming years.

“There’s no chance he would bend or break under pressure – in fact, he thrives under those conditions.”

“He’s green inside and out and stores deadly carbon inside himself.”

The Greens will elect a new leader in the coming minutes.