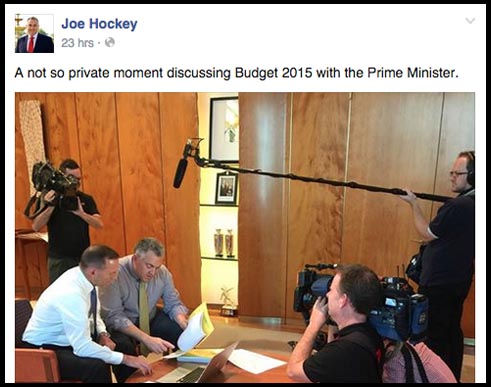 They had one thing to discuss with each other, in front of a scrum of cameramen, The Budget 2015.

Things were tense as the PM critiqued Joe Hockey’s current budget, preparing for an official announcement on Tuesday the 12th.

But as usual with old friends, there was always time for a bit of banter

Joe Hockey: What about the remote communities? Was that Twiggy Forrest shit just a dummy?

Tony Abbott: More like a cut-out. We are closing that shit down, cuz!.

Tony Abbott: Abused women shelters. I thought I told you…

Joe Hockey: Yeah, but you told those Turkish feminists that you were gonna keep them open, last week.

Tony Abbott:  Joe, do I have to remind you. What happens on tour…

Joe Hockey: Slashed. Did you see the bit on TAFE. That was tough… A real pick and drive.

Joe Hockey: What does Pyne think of that one? I’ll give him a call.

Joe Hockey: What, he’s out front?

Tony Abbott: Yeah, I told him to wait in the car. My sisters in there too. Let’s wrap this shit up.