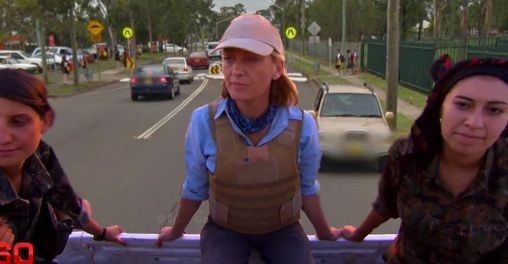 REPORTERS FROM CHANNEL 9 have allegedly been forced to wear protective vests and helmets when reporting on stories from parts of Western Sydney.

After witnessing the appalling conditions in Mt Druitt, producers from Australia’s most watched news service have said “enough is enough”.

While journalists covering conflicts for the network have always been encouraged to wear “bulletproof vests”, they’ve never been made mandatory – until network executives saw the trailer for Streets Of Sydney, an upcoming Australian documentary series.

The kevlar-vests are now compulsory for all network staff reporting from contested battlegrounds abroad and areas of “crime-riddled” Western Sydney.

Can you guess what region this is?

However, Nine has hit back at claims that forcing their reporters to wear bulletproof vests while on location in Mt Druitt is “unnecessary” and “sensationalist”.

“The safety of our reporters will always be paramount to anything else,” says Derryn Candle, Nine’s Director of News and Current Affairs.

“Michael Usher was the first Western journalist to visit Plumpton McDonalds. We didn’t take any chances then and we won’t be taking any risk now,”

“I’ve had freelance cameramen and producers – who’ve been to the worst places on Earth, refuse to get off the M7 at Richmond Road. It’s not safe.” he said.

However, former Prime Minister Paul Keating has lambasted these claims.

“I grew up out west and I refute the claims made by Mr Candle. I found the region to be a safe, family-friendly environment,”

“Maybe some suburbs are a bit dicey, but don’t think it’s all gunshots ice pipes. There is some great Vietnamese food out that way”

“I really enjoyed my time with the working class, that was before I discovered my love for french grandfather clocks and linen suits,”

Despite the upset from Mr Keating and a range of other former Westies, including the Waugh Brothers, Delta Goodrem and most of the NRL – Channel Nine have refused to change their position.

“Mr Keating talks about the Western Suburbs as some sort of magical socialist melting pot. He obviously didn’t hang around long enough to witness this crystal meth plague!”

The “poverty-porn” series, Streets Of Sydney premieres on September 30th. Visit their webpage here and look at their trailer below.