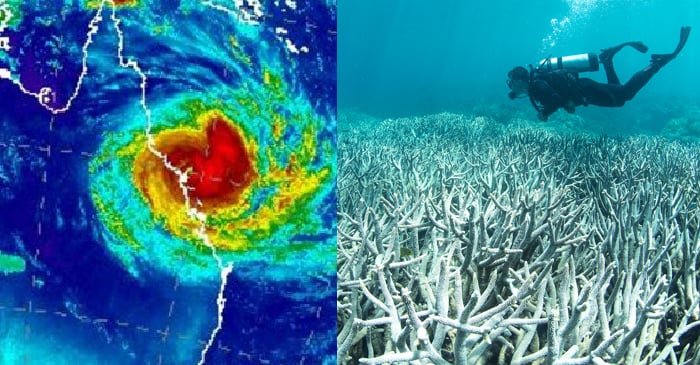 Emergency crews and tourism operators have been unable to assess the full extent of the damage so far on tourist magnets like Hamilton Island and Airlie Beach, but it is believed that it probably won’t be as bad as the the last two years of non-stop bleaching episodes caused by carbon emissions, dredging and offspill in the region.

The Great Barrier Reef’s famous “heart”, which is an international drawcard for tourists — was flogged by winds in excess of 200km/h and huge tidal surges that have flooded resorts and ripped boats from their moorings – but it is believed that the reef is just appreciating this short break from the scorching heat.

On Tuesday, Daydream Island in the Whitsundays said it had “borne the brunt” of Cyclone Debbie” with extreme rainfall and strong wind gusts damaging the property and surrounding areas.

Experts fear for the already fragile Barrier Reef, which has suffered the effects of coral bleaching in recent years – although the Great Barrier Reef says it appreciates the diversity in natural disasters this month.

“It’s great to get pummelled by an obscure weather pattern that isn’t man-made for once” said the Australian icon.