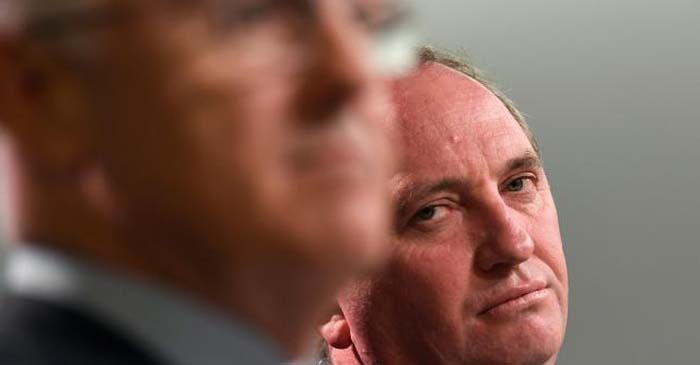 A visible divide down the middle of the Coalition was on display the afternoon, as the Deputy Prime Minister began fantasising about having a dip with the top hat.

During a reluctant meeting between the Nationals Leader and Prime Minister Malcolm Turnbull, the Deputy was seen to be drifting off while daydreaming about dusting off the elite Eastern Suburbs politician, while still seething over Turnbull’s media conference yesterday.

Mr Turnbull began an announcement about banning sex between ministers and their staffers by describing Mr Joyce’s behaviour as, “a shocking error of judgement” that “set off a world of woe”.

While both men were forced by colleagues to talk it out in a Parliament backroom today, Barnaby Joyce began wondering if, hypothetically, Malcolm Turnbull would even stand a chance against him in a Tamworth-style punch on.

“I don’t think that little toff would even land a fucking glove on me” he said to himself.

“I don’t think he would last a fucking minute. He’s never seen me in full flight at the Albert”

“We aren’t in Point Piper anymore your majesty”

This comes shortly after a angry-sounding Joyce approached the media to accuse the PM of making his life harder with comments he gave yesterday about the extramarital affair between Mr Joyce and his former staffer.