Australians have been told to brace ourselves for even more inflation, as the international unrest of war, diplomatic break downs and natural disasters continue to affect the price of bread.

RBA governor Philip Lowe says trade restrictions and global conflict are causing interruptions risk to supply, which in turn is causing higher prices. Mr Lowe says the effects of climate change are also likely to push prices up and make them more volatile.

Dr Lowe argued that matching the wage rises of workers with the inflation rate – which is currently above 7 per cent – will not fix this problem – and in fact could accelerate things in the wrong direction.

He did not offer any remedies to these issues, however, he did say we can expect more of the same. Lowe joins a long list of high-powered political figures who appear to be only qualified to diagnose and speculate about the cost of living and inflation – without making any tough decisions about how to fix it.

One man not afraid to put his neck on the line, however, is the Honourable Bob Katter III.

The Maverick Independent MP for North Queensland has today offered a blueprint for tackling some of the more immediate concerns that everyday Australians are voicing in the backdrop of a limping economy. 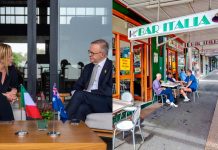