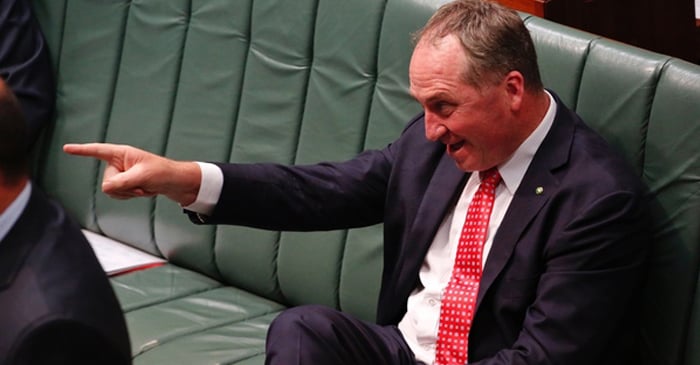 Parliament question time has made way for a lighthearted threat of physical confrontation in Canberra today, as Deputy Prime Minister offered Grayndler MP Anthony Albanese to ‘run it straight’.

Joyce, a former rugby union clubman from the New England, lost his temper during a penalty-rates shouting match between the two parties.

Albanese, a former junior rugby league product of the South Sydney comp, appeared to have ‘gone too far’ in his accusations that the Coalition MPs had ‘never spent any time around real punters’.

“What was that?!” barked a passive aggressive Joyce.

“I bet you won’t run it straight?’

“Come on, let’s go outside. Run it straight Albo”

The entire Australian parliament then broke out in ‘oooooh’ sounds before Prime Minister Malcolm Turnbull turned to Joyce to ask what ‘Run it straight’ means?

“It means I stand on the lawn and Albo runs as hard at me as he can” Joyce informed the PM.

“Well, what do you say, Albo?” Turnbull asked Albanese.

Albanese responded by saying that the proposition was ‘typical of the loony libs’ and that he doesn’t need to dignify himself by physically overpowering Barnaby Joyce.

The entire Liberal party then broke out in chicken clucking sounds.

“Shut up you Christensen, I’d punch holes through you! You walking Lowes ad!” shouted Albanese.

“Sofffftttt cooooockkk” shouted Barnaby, as the entire house of representatives broke out in laughter over Albanese’s red face.