Medical Experts have today taken a moment to praise Federal Labor Leader Anthony Albanese for his commitment to leading by example when it comes to self-isolating.

This follows the leader of the party that that is currently not in government (traditionally called an ‘Opposition’) making extra sure that he doesn’t catch or transmit the deadly virus, by seemingly staying at home for the last few months.

His lack of air time comes in stark contrast to Scott Morrison who seems to be regularly appearing whenever things are looking somewhat marketable for him and his government.

While some would argue that maybe Albanese should be offering up some opposition to the policies of the Government (because technically that’s his job), or even offering some bi-partisan support and assistance on major issues – health experts have said Alabanese’s behaviour has been medically exemplary.

“I mean he could have just worn a mask and got out there and started fighting for the rights of working-class people and different minorities who used to be the Labor party’s base, but even then there’d be a slight risk of transmission, so it’s great that’s he’s parked up on the couch with some Two and A Half Men and protected his constituents,” Deputy In Chief Medical Officer Expert Brent Sampson said today.

“I guess Australian workers and industries are going to be decimated by the stupid political spat the Morrison government seems hell-bent on having with China,” he continued.

“And the current state of the housing market means it may not be affordable for plenty of members of future generations who don’t have a trust fund in their name to ever live close to a major city’s CBD.”

“But those issues can wait for this Covid-19 thing to clear up,” he said.

We contacted Albanese for comment on why he hadn’t been sighted in the last few months since this pandemic thing kicked off, and after the episode of THM finished he called us back.

“What makes you think I’m going to try and pitch big ideas like transitioning our workforce out of being heavily reliant on traditional industries, and trying to develop a plan to make sure our country has some long term goals we are working towards, to ensure we don’t stay bobbing in the waters below this economic cliff we are about to go off,” he continued angrily.

“Now’s not the time to come up with a marketable plan to show why things like renewables could be a highly employable and profitable sector that can help provide a path out of all this shit and a fuck load of jobs for everyday Australians.”

“I’m just gonna keep letting Scott set up for a decade of austerity where working-class Australians have their wages further stagnated to ensure corporate profits continuing rolling in.”

“Until the time’s right, which is maybe like next election year or something,” said the man who seems to have forgotten the Coalition mercilessly attacked any Labor leader on any issue they could. 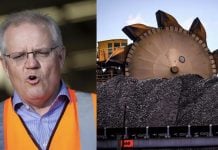