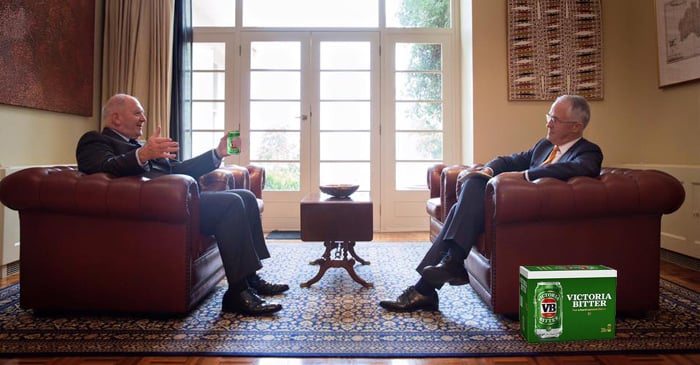 Prime Minister Malcolm Turnbull has today visited the Governor-General Peter Cosgrove to ask for a double-dissolution election. He then launched the nation’s longest election campaign since the 1960s, culminating with a July 2 poll.

With the current Government’s pre-election promises currently under the spotlight, Prime Minister Malcolm Turnbull says the path is clear for the “greatest years in our nation’s history” – and it seems he won over former Australian Chief of Army and Chief of the Defence Force, General Sir Peter John Cosgrove, AK, MC.

Speaking to The Betoota Advocate this afternoon, The Governor-General said he himself was initially apprehensive about the Prime Minister’s pleas to dissolve the Parliament in preparation for an election, but quickly changed his tune when he was made aware of the fact that Malcolm Turnbull had arrived at Government house with a 30-block of ice cold green tins.

“Fuck, I didn’t need much convincing after that. That handsome silverfox knows how to do business!” chuckled the 68-year-old representative of Her Majesty.

“Any bloke who rocks up to my place on a Sunday arvo with a block of Victor Bravos and a deck of stuyvies is a fine by me,” 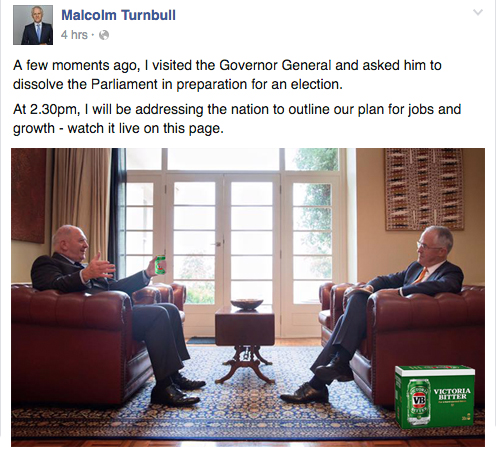 “He treated our meeting with the respect it deserved, and he’d done is research. I’m a military man and I enjoy all things green – It also allowed us to skip the niceties and get down to business,”

However, while it seems the Prime Minister has sailed smoothly through today’s meetings and announcements, ABC political commentator Barrie Cassidy has pointed out that arriving at Government house with a cold carton of tins could be considered a form a political bribery.

“It all comes down to how many beers Mr Turnbull had alongside the Governor-General,” he said to ABC 24.

“If it was a case of him having 1 or 2 and leaving the rest of them to Cosgrove, then he might have an issue,”

“If he stuck around for more than six, well obviously that’s more of a shout. It’s something that everyone is going to be looking at in the next few days regardless,”

“A lot of people are under the impression that Turnbull would have to be half-drunk all the time with some of the shit he keeps pulling out before this election, but he seems to be impressing the right people.”