In a mid-to-late season entry that could bring a tear to even the most calloused, dried, Gold Coast eye, the results are in and Presto’s boy has got some chop in him.

Son of rugby league legend Preston Campbell, Jayden Campbell will play fullback for the Gold Coast Titans in their first NRL finals game in five years in a huge win for people who love a good rugba league family story.

As angry YouTubers who hate vegans and women will make clear, being the son of a footy great is not an easy thing, especially when your old man is Preston Campbell; the 2001 Dally M Medalist, driving force behind the Indigenous All Stars and premiership winner in 2003, a season where he played every minute of every game.

Playing fullback for the club that made his dad their first lifetime member, in his six appearances young Campbell has scored five tries & three assists, averaging 164 running metres, 26 total tackle breaks and an absolute monster shot of Nico Hynes during his debut game.

Campbell’s impressive playing style has been widely discussed by rugby league pundits as well as the nation’s rugby league mum’s who can’t help but get just a bit teary seeing Presto’s little fella tearing it up like his old man used to.

“Presto’s boy, look at him go,” stated rugby league mum Sharon Gould, who has been wishing for more players like Presto since 2011.

According to Titans coach Justin Holbrook, Campbell is the future of the club and will hopefully play with them for many years as long as David Fafita doesn’t accidentally sit on him during training. 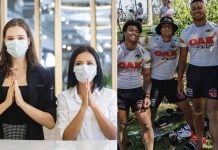