Local mum, Amanda Beams has never once before mentioned that she was such an avid gymnastics fan.

A discovery her teenage children made this afternoon while she sat on the couch in a weird, distracted mood and watched replays of every single event, from the horizontal bars, to the rope climbing.

“She’s got no idea of how these sports work. None of us have ever done gymnastics,”

“She keeps saying that British bloke [Joe Frazier] is going to win – but she has no idea what is required in a winning performance,”

Tim says his mum has completely disregarded her entire schedule this afternoon, as his youngest brother Toby arrives home from football training on foot.

“Dad called up earlier and said he was running late at after work drinks with his mates… She told him to stay out all night. What the hell? She never says that kind of stuff,”

However, Amanda says she’s always been a big fan of Gymnastics on the international stage

“I first got into it years ago,” she says

“At the 2006 Commonwealth games in Melbourne. That Sam Offord was very dishy,”

While Mrs Beams’ continues to rattle off obscure statistics about the performances of handsome young men in different international gymnastics events over the last two decades, her three sons begin to cringe and one leaves the room.

“This year, I’m really interested in young Max Whitlock from Britian. He’s got a lot of potential” she says, as her eyes begin to water from not blinking for over five minutes while watching a replay of his rings event earlier today.

“I mean, I READ such a good piece on him. In the Herald this morning.” 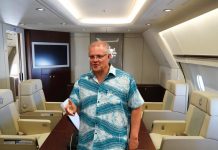