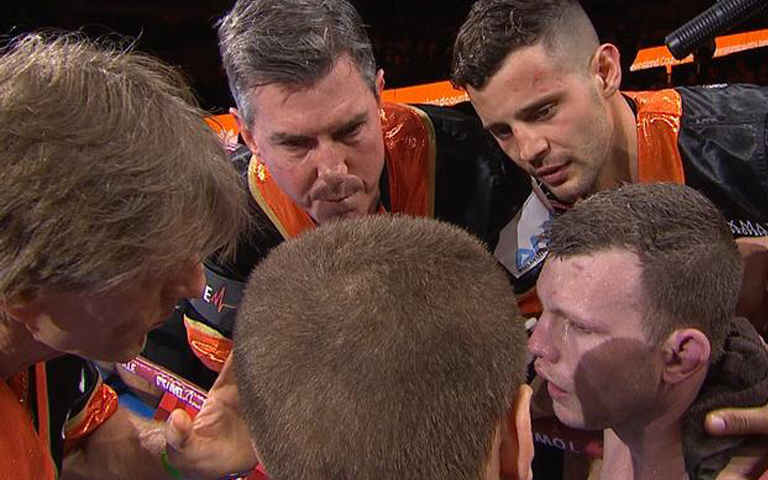 Australian boxing experts have scolded Jeff Horn’s trainer Glenn Rushton for appearing to exploit his pummelled fighter into another round before being overruled by the rest of the team in his corner, who called a stop to the massacre during last night’s super welterweight fight against Tim Tszyu.

Horn was comprehensively out-boxed by Tszyu who gave Townsville a night to remember, finally stepping out of his father Kostya’s shadow with the eight round hiding.

Unable to land one of his awkward rights on the 25-year-old, Horn was left in a state of battered exhaustion by Tszyu before an eighth-round corner stoppage ended the fight.

With Horn barely able to keep his head up and appearing to mumble “I don’t want to” when he returned to his corner after round eight, his weirdo trainer Rushton was caught on camera refusing to take no for an answer.

“What do you want to do?!” Rushton repeatedly yelled at Horn, seemingly waiting to get the answer he wanted.

Horn was seen shaking his head as the rest of his corner caught on.

“Have you got a punch left in you or no?” Rushton asked Horn who managed a “no” – crushing Rushton’s dying dreams of finishing the fight with a knock out on Tszyu.

Rushton didn’t back down.

“I know you’ve got a lot on your plate right now, but please, I need you for a couple minutes after this massacre”

“Actually, fuck, has anyone got a pen? We could do a few now while you decided whether you want to go back in for the 9th”

“Also. I also need to you to head down to Kirwan tomorrow, there’s a Hyundia dealership down there that I’ve promised an appearance.”

Rushton, realising he was getting carried away with the commercial aspect of the sport, quickly went back to exploiting his fighter’s body by urging him to go back in.

“Maybe, get yourself disqualified so it doesn’t count as you being officially outboxed, remember this is my reputation we are trying to preserve at this point”

“Do you want to give us another minute?” Rushton pressed on, despite the continuous shaking of Horn’s head.

Eventually, a fellow trainer was forced to intervene, telling Rushton “I think that says it all right there,” before the fight was thankfully stopped.