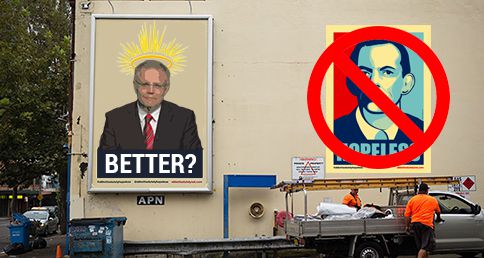 SCOTT MORRISON is emerging as the new Liberal pin-up boy, just months after being accused of violating human rights by the United Nations.

The minister for social services has become the face of a new Coalition advertising campaign which markets the sprightly 46-year-old as a “softer and more approachable” politician, as opposed to the ever evanescent Joseph B. Hockey  or the perennially downtrodden Tony Abbott.

Speaking this morning on Channel 9, Morrison’s segment was introduced from the ad break with a stirring rendition “My Hero” by the Foo Fighters before he easily disposed of a string of hostile questions from host Lisa Wilkinson in true rock star form.

Replacing the overtly socialist “Tony Abbott hopeless” billboards in Sydney’s Chippendale, the federal government has paid for their own advertising material to replace the once famous Shepard Fairey rip-off of Obama’s hope image.

Plans to include “pro-Liberal propaganda” in the inner-west has been met with unbridled backlash, with local residents lashing out at suggestions that Scott Morrison is a suitable replacement for anybody in federal politics.

“Is everybody suffering from amnesia?” said one Redfern local.

“This is the same guy the United Nations said was committing crimes against humanity. Now he’s on my television… laughing?”

“Personally, I’d rather have Joe Hockey as PM over Scot Morrison – at least he had the balls to go on Q&A alone.” she said.

Treasurer Joe Hockey is releasing his second budget tomorrow morning and is promised by the PM that he’ll keep his job regardless of the reaction, whether it be good or bad.

“Joe is the right man for the job,” said Mr Abbott.

“He’s led the treasury with great wisdom and intelligence for a long time now and I have every confidence that he’ll continue to do so in the future,”

“We gave Scott Morrison an easier portfolio for that very reason, we didn’t want to see history remember him as a human rights criminal.” he said.