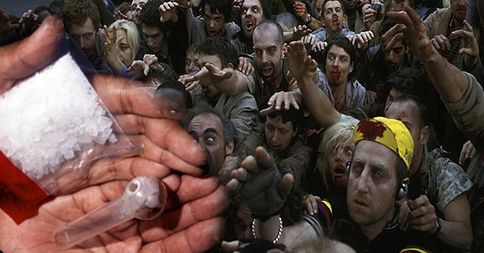 THE NSW CENTRAL western town of Wellington has successfully bid to be the filming location for the much anticipated World War Z 2, which starts principal photography in November.

Known locally as “Little Antarctica”, the quiet village beat other meth-riddled towns such as Mount Gambier, Bourke, Ballarat and Wangaratta.

The film project is expected to throw almost A$50m in to the local economy next financial year.

Producers from Hollywood are flocking to Australia once again after the dollar continues to fall against the greenback and the recreational use of crystal methamphetamine spirals out of control.

The decision has been met with controversy as locals say the Americans are taking advantage of small Australian towns struggling with ice epidemics.

What started off as a rumour, has now been confirmed by World War Z 2 producer Daniel Erncern, who says that the studio was on the lookout for an “outback Australian town with an abundance of ice addicts”.

“Wellington is perfect because we don’t have to look far to find zombie extras,” said Erncern.

“This place is amazing. It’s the first place I think has that genuine zombie apocalypse feel to it,”

“Townsfolk who aren’t addicted to ice have to arm themselves for their own protection,” he said.

Local grazier and Rotary Club patron, Ernest F. Holden has been a life long resident of the Wellington District. While he’s pleased to see investment in the region, he’s afraid it’s for all the wrong reasons.

“Wello [Wellington] has cried out for support for years now. This drug is destroying the young people of this town,” says Mr Holden

“We’re talking millions of dollars here. Hopefully some of that money will be injected into health care and drug rehab programmes, but I’m not holding my breath,”

“It has got real bad here, especially in the past 12 months. I don’t go in to town without something to protect myself with. I bought some grain the other day at the CRT – the store owner stood guard on the roof with a .30-30 to make sure we didn’t get robbed,”

Has ice affected your family? Please leave a comment below.