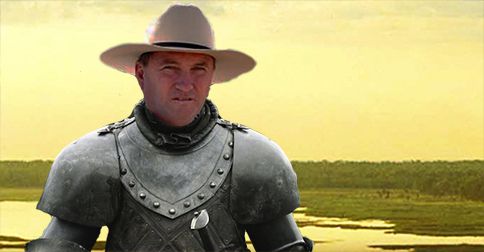 NATIONALS DEPUTY and agriculture minister Barnaby Joyce is set to be crowned “King of the North” after fighting to secure a massive $5bn funding injection in to the Top End in last night’s federal budget.

The fiscal windfall will provide low-interest loans and finance to private businesses to build major infrastructure projects such as rail lines, ports, electricity and pipe lines – working toward making the Darwin “Australia’s Singapore”.

In addition to this, there’s also $100m set aside to build better transport links for the cattle industry, an industry that’s still recovering from the public caning it received under the Gillard government.

For the first time since the Coalition golden era under the Howard government, an agriculture minister has finally thrown their weight around the party room – which has seen drought-stricken farmers receive $300m in much needed assistance.

It’s unknown if Nationals leader Warren Truss was involved in securing this cash bonanza for the country. If he was, then we give him the double thumbs up, too.

Goodooga grazier Sterling Winter says that although many farmers had their apprehensions with Barnaby early on, it “looks like he’s done good” this time around.

“Yeah… we weren’t too sure about that Joyce. Off the bat anyway. Jumped the gun a bit and used his inside voice too much,”

“Looks like he’s had a bee in his bonnet this year. He’s come good for us and stuck up for primary industry,”

But as regional Australians celebrate their budget godsend, who are the Australians who’ve had to sacrifice something to help out their country cousins?

The big Top End spend comes at the cost of stay-at-home-mothers, wealthy pensioners and backpackers – so who, in good conscience, say that these hard-working-salt-of-the-Earth Australians don’t deserve a bigger slice of the Canberra pie?

Many outspoken and entitled socialists have spoken out this morning against Joe Hockey’s plan to give back to the industry that built this nation, most of which are stay-at-home-mothers, wealthy pensioners, backpackers and people receiving the dole.

“Shame on you Joe. You have blood on your hands,” she said, in a surprisingly deep voice.

“Farmers make money off the mystery and tyranny of animals. We should tax them all out of the industry and give the money to animal conservation,”

“Humans haven’t evolved to the point where we can digest meat or milk – so why do we eat it? It’s dumb. Just like Tony Abbott.” she said.

Have your say below. Has the government finally come good for farmers?