Wallabies fans have received a significant shot in the arm today, with news that there’s a new coach in town!

Rugby Australia’s Marketing Pigeon has revealed that it has fired Dave Rennie and hired Eddie Jones – just 8 months out from the Rugby World Cup.

It’s unknown if the feathered bird got the date wrong on the firing and hiring, with many assuming a decision like this would be made after this year’s Rugby World Cup.

However, for better or worse, it now seems that Australia will be going to the RWC in France with Eddie Jones at the helm.

That exciting news means the Wallabies are now beginning to believe that they could topple European giants Portugal at the upcoming edition of the tournament.

Eddie Jones famously took Japan to a historic victory over South Africa nearly 8 years ago, and it’s believed that the playing group are now hopeful that they can replicate that miraculous feat.

“But after years and years of hurt, I’m managing my expectations.”

“With Eddie at the helm we are now a decent chance of knocking off Portugal in St Etienne.”

Jones will take up the reins on the 29th of January, with Dave Rennie set to wrap up what seems like a pretty pointless Wallabies training camp. 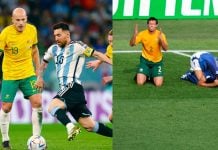 Surprise Surprise: Team That Just Beat Australia In Round Of 16, Wins World Cup