Despite being pumped by the Melbourne Storm last week, the Parramatta Eels are renowned for their ability to lift out of nowhere in the final throws of the season – as was confirmed by their 58-0 defeat of the Brisbane Broncos this time last year.

With nothing but positivity coming out of Brad Arthur this week, and a home ground advantage, the Eels could very well trample their way to the semi-finals if the boys are on tomorrow night.

This result would be quite an issue for the Eels’ most prominent one-club legend, because a win against the Bunnies would mean his old team is one match closer to winning a Premiership without him.

Now an entertainer/comedian on multiple variety tv shows, Hindmarsh is famous for having never won the comp. Unlike on his colleague Bryan Fletcher.

Fletcher, who played in the same position as Hindmarsh throughout the same era of football, is remembered for trucking nut off the bench in the Sydney Rooster’s 30-8 win over the New Zealand Warriors in the 2002 NRL Grand Final in front of 80,130 screaming fans.

This kind of euphoric career milestone was never afforded to Hindmarsh, who only ever made it as far as the controversial 2009 Grand Final loss against the Melbourne Storm, side who were later stripped of their Premiership.

It is for this reason that ‘Hindy’ is now death-riding his former club.

“If I don’t get a premiership, no one gets one” he drunkenly told an uninterested stranger at the Bowral Hotel at 11am this morning.

“Nothing against the boys. I still love the club. But they don’t deserve the fireworks unless it’s me holding the shield”

However, these comments contradict Hindmarsh’s previous claims that he does not view an NRL premiership to be the pinnacle of rugby league glory.

Hindmarsh has been quite vocal about playing down how much a premiership means to him in the past – most notably during an argument with Johnathan Thurston on one of the eighteen Fox League panel shows last year.

“Mate, I’m the first bloke in the history of rugby league to captain the Prime Minister’s XIII on two seperate occasions” he told Thurston.

“I couldn’t give a shit about your two premierships and eight Origins. Come back to me when you’ve got those kind of stats next to your name” 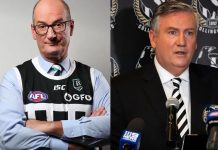