Though local woman Tess Eastes likes to consider herself a green thumb, it appears as though she’s more in love with the idea of plants, rather than the actual plants themselves.

Like many women, Tess has always been attracted to the idea of a biophilic household, complete with a reading nook filled and an assortment of greenery.

But despite these dreams of a Pinterest perfect wholesome life, Tess has faced an uphill battle with keeping her plants alive, as even the humble snake plant proves too high maintenance for her hectic schedule – just like taking vitamins, Tess tends to only water her plants when she remembers too.

Though her neglected plants have reportedly been able to hang on just barely in the past year, the silly season has sadly proved to be their downfall.

Which is ironic, given that they look exactly how Tess feels.

After a solid six weeks of excuses to drink and with the Hottest 100 just around the corner, Tess’s intermittent watering has become even more scarce, causing many of her plants to wilt and brown, including her very dramatic Zebra plant.

Pausing to elevate the leaves of a plant she can no longer even recognise, Tess theories that she feels just as shitty on the inside.

And a few splashes of water and some sun might help, but there’s a lot of rebuilding to do. 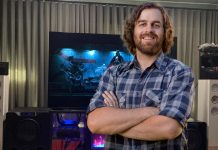