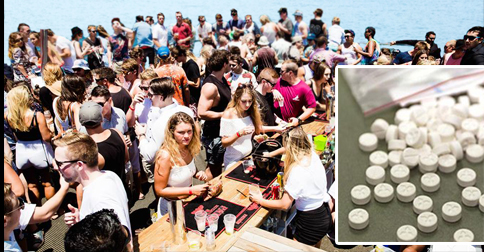 A prominent Sydney cruise company is making tens of thousands of dollars a month offering a special ‘out-of-sight’ package on the outskirts of Sydney Harbour.

But where are they going?

They aren’t going anywhere. Just 200 nautical miles away from land, into The Exclusive Economic Zone (EEZ), an area beyond and adjacent to the territorial Australian sea.

The post-Martin-Place-siege tourism slump has seen many harbour fishing and cruise charters having to adopt new marketing strategies to turn a small profit – with the most successful companies targeting homegrown Sydneysiders in their late teens and early twenties.

One company in particular, Harbour Party Cruises (HPC), has refurbished a formerly retired vessel for this new wave of “boat parties”.

An investigation by The Betoota Advocate has uncovered several secret Facebook pages and password entry websites, discussing the departure dates of weekend cruises on what has been dubbed the “Bender Boat”.

Several cadet journalists at the Advocate have been able to gain admission into some of these secret online communities, and what was uncovered will shock parents across the country.

One such group with over 20,000 members, actively posts information on the types of drugs available on the cruise, the best time to take them and basic info on CPR to “deal with a bad munt”.

There is even forum thread labelled “NEEDLES: If you’re going to get pinned, make sure you have a couple of mates around.”

The popularity of drug-crazed raves in “International Waters” follows a slew of similar festival cruises that are making headlines in the Caribbean, however the difference is that HPC sells itself as a vessel for Australians to do drugs, not too far from home.

Another popular online thread saw members discussing the expected cost of a “pinger” (ecstasy tablet) on the cruise, and another thread completely dedicated to members posting images of who has “snorted of the biggest “line” (a measurement of a drug) of rack (cocaine) on the cruise.”

The Betoota Advocate investigation uncovered two such cruises over the 2014/15 summer. The popularity of Harbour Party Cruises, and their growing underground following, indicates that there will be a departure each month starting in August.

One fact duly noted by The Betoota is that there is scant publicity around DJ acts on the cruise.

When this question was asked to some of the group members via the online forums, the reply was definitive, if not crass:

“We just wanna smash pills and take our shirts off. On the boat we are happy to admit that. No one gives a shit, as long as there is some hectic trap and a couple huge drops!”

Edward*, a frustrated coast guard officer replied to The Advocate’s questions regarding the secret bender boat. He recalled one particular cruise in early January where “they sat anchored about twenty metres into the E.E.Z drinking and carrying on for three days.”

When pressed on their behaviour Edward said:

“They swore at us and most of them didn’t have any clothes on. It was like a fucking floating zoo,”

With the party boat craze growing steadily, it remains to be seen just how the illicit substances make their way into the hands of partygoers – whether they are smuggled on during boarding at Sydney – or met in the international waters by traffickers.

So far the cruise line has ignored The Betoota Advocate’s invitation to address these claims.