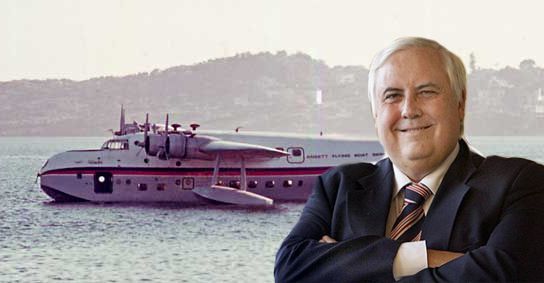 FLYING BOAT OPERATIONS could resume in Rose Bay in 2016 under a landmark agreement between the Civil Aviation Safety Authority and Woollahra Council.

The current tenant at the Sydney Eastern Suburbs airport is a consortium led by an aviation family, which leases it out to a handful of commercial and private floatplane owners.

However, the lease is due to expire in the coming months and the occupants have expressed their interest in moving operations to Port Hacking, near the Central Coast.

Controversy surround the mining magnate’s future in federal politics has dominated headlines this month has another Palmer United Member has chosen to cut the iron ore umbilical cord.

For weeks now, Clive has reportedly been searching for something to occupy his time as he looks to set down from public life.

As a small boy, Palmer revealed that he has fond memories of catching a “flying boat” to Lord Howe Island, which lies roughly 600 km directly east of Port Macquarie.

“This is a golden opportunity to revive a small piece of history from the golden age,” said Mr Palmer’s spokesman today in Sydney.

“What we plan to do is emulate exactly what the experience would’ve been like 50 years ago,”

“In every way possible.”

In his plan released today, Clive Palmer’s party spokesman outlined exactly how he plans to do that.

The most intriguing features being his desire to reintroduce smoking, drinking-to-excess and very minimal security screening.

His justification for wanting to bring these draconian rules are taken straight out of an episode of Mad Men.

“This won’t be a service for the everyday person,” said Palmer’s spokesman.

“As far as I’m concerned, a 62-year-old retired merchant banker from Watsons Bay shouldn’t be forced to go through airport security, go without a cigarette for longer than an hour or be forced to sit next to a person wearing a singlet,”

“This Lord Howe Island only service will cater for the type of Australian who can be trusted to act responsibly on an aircraft,”

The proposed airline would be run in partnership with the nearby Royal Sydney Golf Club, which is touted as being the most exclusive organisation in the country – where religion, education, background and net worth are all considered before an application is even opened.

When quizzed whether the reintroduction of smoking on commercial flights, Mr Palmer’s spokesman said he’d already found a way around that – and CASA says “there’s nothing they can do” about it.

“What Clive has outlined that his operation is not a commercial venture. If it was, he’d have to operate accordingly with civil and federal aviation laws and whatnot,”

“Mr Palmer would own these “vintage” aircraft outright and use them to his heart’s desire – which anybody can do in this country of ours,”

“However, for a small political donation to the Palmer United Party, he could offer a ‘joy flight’ in return for your gratitude – legal, as long as no money or reward is exchanged for the flight itself,”

“It’s pretty funny, though. Most people who fly in singlets and thongs are because of Clive Palmer.”

The plan to reopen Rose Bay to large scale flying boats has been met with both nostalgic joy and fierce opposition from residents, which has divided the once sleepy backwater.

One lifelong resident of Rose Bay, Edith George, has welcomed the return of the “big flying boats” to the Bay because “it reminds her of a time when she was happy”.

“I was 19-year-old when the war came to Australia,” she said.

“All those charming Americans in their uniforms walking around everywhere – flying those enormous marvellous machines,”

“I’d love to see them come back before I go – perhaps I’d still be able to get one of those fly-boys to each me a thing or two about life.”

On the other side of the fence is Mandisa Emmanuel-Botha, who says despite her husbands wealth and business success, wouldn’t be invited on board and that the larger aircraft would be “too noisy”.

The South African-born naturopath says that her family has already faced discrimination in the wider community.

“We weren’t allowed in to Royal Sydney because my husband and I are members of the South African Jewish community,”

“That was a big enough pill to swallow – we could handle being shunned by a bunch of near-dead racists who still live off their father’s coat tails but to be blown off by another nouveau-riche entrepreneur who made his money screwing over traditional land owners really hurt,”

“I hope he comes to his senses.”

A petition has started t stop the proposed redevelopment of the Rose Bay foreshore, which can be found here.