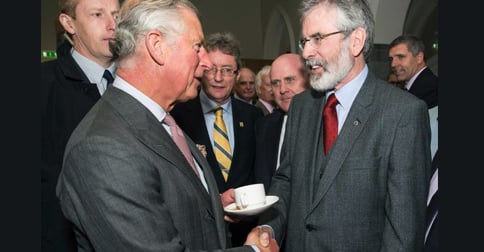 ROYAL FAMILY loyalists say they are not surprised that majority of the United Kingdom consider Prince Charles to be the worst thing to come out of the British Empire since smallpox.

In a recent survey conducted by the BBC: 90% of respondents indicated that the believe the 66-year-old has a worse reputation than the entire IRA movement, a political enemy of Britain that was responsible for several killings during the 1972 Bloody Sunday massacre — one of the worst atrocities in the Northern Ireland conflict, known as the Troubles.

The most hated man in Britain was lucky enough to meet Irish republican leader Gerry Adams during a visit that will take him to the scene of his great-uncle’s murder by the IRA.

The most hated man in Britain met with the less-hated man at the National University of Ireland’s campus in Galway on the west coast shortly after starting a two-day visit to the republic.

Mr Adams leaned forward several times as they spoke for less than a minute before introducing Prince Charles to other guests.

It is unknown how long Prince Charles plans to spend in Ireland, but it would seem he is no longer at risk of being assassinated.

This news has upset many around the world, as fans of the late Princess Diana realise if Ireland won’t make him pay for what he did to his first wife, no one can.