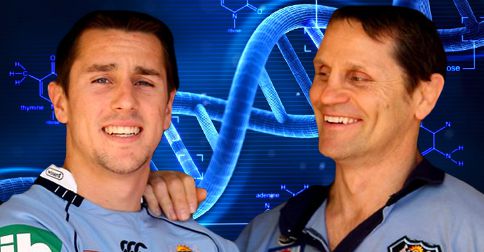 SYDNEY ROOSTERS half back Mitchell Pearce has been rewarded for his hard work, determination and outstanding genetics so far this season, earning himself a spot in the NSW Blues team.

State of Origin kicks off next week as the boys in blue look to defend last year’s title.

The decision by Blues coach Laurie Daley has been met with unbridled backlash from NSW fans as its common knowledge among punters that the 26-year-old “just isn’t up to the job, yet.”

However, Pearce has been impressive so far this season for the Roosters, scoring a try.

“Mitchell has been rock solid this year. Everyday he looks more and more like his father,” said Daley.

“He’s worked hard this season studying under his dad’s guidance,”

“I don’t know why people have always said he’s not good enough for Origin.”

The ever-controversial John Hopoate has also passed his genetics on to the latest crop of NSW representatives as his son Will makes his return to the blue jersey.

During a 2001 clash with the Cowboys, John Hopoate, in an attempt to unsettle several of his opponents, inserted his finger in three players’ anuses, the first occurring during the seventh minute of play.

Hopoate subsequently was charged with unlawful sexual connection in relation to the incident.

On the flip side, Queensland Maroons coach Mal Meninga says that selecting a player based on their genetic makeup is not good for the game.

“If I chose my players the same way Laurie does, I’d have Lincoln fucking Lewis at five-eighth,” said Meninga.

“Look, that’d be funny but we’re here to win matches, not please the NRL patriarchy,”

“The best thing about Queensland is that all of our players have come from fucking nothing. The boys are hungry,”

“But fuck me, what was Laurie thinking?”