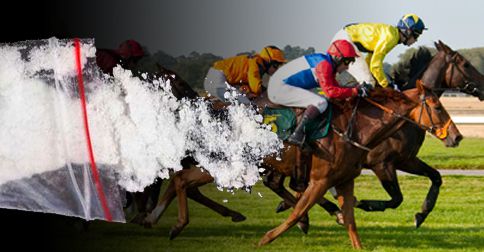 FEDERAL and New South Wales police say they have shut down a national ketamine syndicate after charging a prominent country jockey, following raids across NSW.

Dale Ellis Clarke, 24, was charged by police with drug and theft related offences overnight after it was revealed by an informant that Mr Clarke was the head of Australia’s largest ketamine ring.

Ketamine is used by veterinarians as an animal tranquilliser and sedative but is abused by recreational drugs takers as it can make users feel “happy, relaxed and ‘chilled’ out”.

However, when administered to humans, the side effects can be fatal.

Originally from Glenn Innes in the state’s New England region, Mr Clarke first saw the profitability of “heavy-duty ket” after many of his professional friends and clients lashed out over the amount of “shit coke” flooding the market.

The Sydney-based jockey has ridden many Group 1 horses to victory for exclusive stables, which cannot be named for legal reasons.

It’s understood by police that Mr Clarke abused his power within one stable in particular and was able to acquire commercial amounts of a particularly dangerous and highly potent batch of ketamine which he then sold on as a recreational drug.

The extremely powerful horse tranquilliser is used by electronic dance music enthusiasts because it produces a pseudo-psychedelic high that heightens the senses and makes any despicable actions socially acceptable.

Backpacking Brazilian warehouse raver and ketamine connoisseur, Pablo Rhanido says that the current supply of ketamine is the best he’s ever sampled.

“It’s not everyday people get their hands on veterinary-grade ketamine. Quite refreshing after keying your way through a mountain of shit ket,” said the 23-year-old.

“I went to a Goa-inspired hypno-groove rave over the weekend and some guy offered me a cheeky bump next to the ATM,”

“Ten minutes later I was on my hands and knees speaking to Moses on the floor of the disabled bathroom while people urinated, fornicated and did drugs around my writhing body,”

Police and medical authorities have warned people who may have procured some “good ket” recently, as it may be the extremely potent ketamine stolen by Mr Clarke – which police fear could cause record-long “k-holes”.

Public health officials have already seen people admitted to hospital displaying deadly “k-hole” type symptoms, which include the loss of fine motor skills and the ability to mesh with society.

“The public and drug uses in particular, need to be made aware of the dangers of high-powered ketamine,” said Dr Graham Tripp, who’s been the director of emergency medicine at Royal Prince Alfred Hospital since 1999.

“In the early hours of Sunday morning, a patient was admitted to the emergency department who we later found to be overdosing on ketamine,” said Dr Tripp.

“Doctors were forced to pump his stomach. The contents of which were over $5 in silver coins, an entire stick of chewing gum and a hotdog,”

“The patient was hilarious, though. He was just so content with having a good time, I don’t even think he knew where he was,”

“Ketamine is much safer than ice or alcohol.” he said.

Typically, a “k-hole” will only last for a several hours, however, people who’ve consumed ket from this particular batch of high powered “special-k” can expect to be “stuck in a k-hole” for up to 30 days.

Mr Clarke was released on bail and is due to appear before Downing Centre Local Court on June 18.