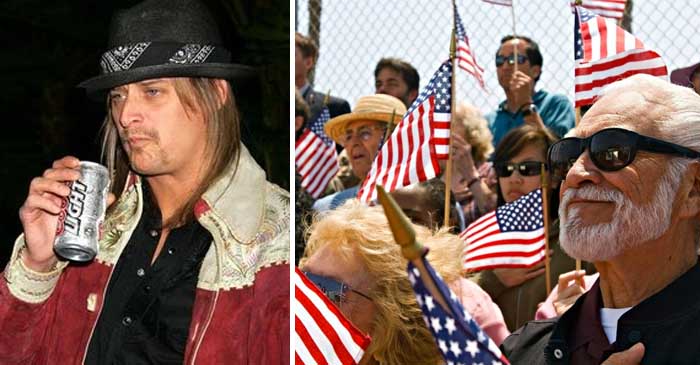 A poll conducted by Columbia University has concluded that the overwhelming majority of the ‘real Americans’ who guided President Donald Trump to victory last year are now beginning to regret their decision, with most of them explaining that if they had the chance, they’d rather have Kid Rock as their voice in Washington.

It’s a shock result for Trump, who after 100 days in the top job, has one of the lowest presidential approval ratings in modern history.

However, for one South Dakota shale oil worker, the bitter pill of his president’s betrayal of the American working class has been quite difficult to swallow.

“That Donald Trump said he was gone fix this gotdam mess, but he just made it worse, man,”

“Shit man, we should’ve voted for Kid Rock. He’s from Motor City, yo. Real working class. He knows what we need, not some turkey-necked daddy’s boy from Queens. Kid Rock would’ve led from the front, yeah.”

The Advocate reached out to Kid Rock’s management for comment and promptly received an articulated and well-thought-out-response that exceeded the entire newsroom’s expectation.

“First, I guess, ahh. Yeah. Umm, I guess we should make everyone rich again by creating jobs via mass infrastructure projects. Then yeah, I would’ve, ahh. Perhaps put a hammock up in the Oval Office and just relaxed after that.”