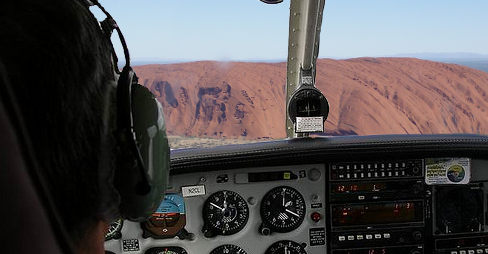 A LIGHT aircraft pilot has been arrested on the tarmac at Alice Springs airport after allegedly performing a “touch and go” on the top of Uluru.

The 27-year-old man from Yaraka, in central western Queensland, was granted bail by Alice Springs Magistrates Court as his legal team arrives in the red centre over the weekend.

The tyres on the aircraft left two long marks on the surface of the famous landmark, which is expected to cost millions to remove.

He has been charged with a string of aviation and criminal offences, which include operating an aircraft while intoxicated, endangering the safety of an aircraft and criminal damage to a sacred site.

The man’s six-seater, single-engine Piper Saratoga has been seized by Northern Territory Police for forensic examination.

Detectives are trying to establish what motivated the man to try to land his plane on the monolith and he’s chosen to remain silent on the matter.

Local media have dubbed the pilot “The Red Centre Barron” but have been placed under a gag order – effectively blacking out coverage from mainstream media.

Dayle Wap-Johns is a cleaner at the nearby Ayers Rock Resort and saw the action unfold.

“He coming in hot. Like real hot,” said Mr Wap-Johns.

“He done flown right over [sic] my head and straight on for the rock,”

As The Betoota Advocate is independently owned and run, we are not subject to the gag order and can report on the story accordingly.

The alleged aviation criminal is set to reappear in court later this month.