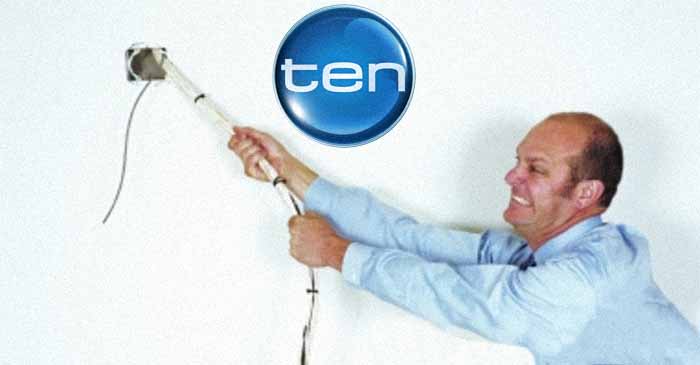 A number of employees at Channel Ten have taken the news that the network has entered receivership this afternoon quite badly and have proceeded to start stripping the copper wiring from the ceilings and walls.

The dramatic scenes come as many staff don’t know if they’re going to get paid tomorrow, despite senior executives and administrators telling them that it’d ‘be as close to business as usual as possible.’

A panic happened shortly after the announcement this morning from the Ten board that the company could not find a guarantor for the $250m loan that’s been keeping the business afloat, which lead to employees fighting it out for the remaining assets such as Lenovo ThinkPads and copper.

One Ten employee described the scenes to The Advocate, saying that he’s never seen such a depraved frenzy.

“You’ve got people climbing over each other like it’s the last days of Rome,” said an insider.

“Swinging fire axes at cabling and computers, it’s absolute bedlam. Internal security staff have evacuated the executives and media personalities who caused this mess, leaving us peasants to fight it out for what’s left,”

“Somebody even ripped the Hugo Boss jacket right of Hugh Riminton’s back. He has a Walkley for Christ’s sake! A week ago people were treating him like Rupert Murdoch. This afternoon, he had to jump from a third-story window to save his own life,”