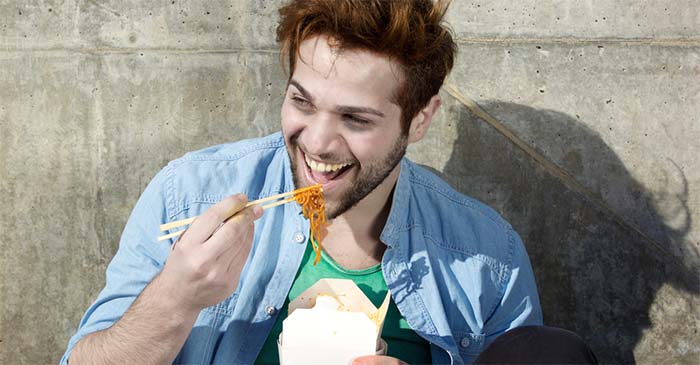 FINDING A NEW WAY of disgracing and embarrassing himself each day, friendly area bartender Martin Shorthorn woke this morning to find no food in the fridge.

He even opted to dine in, choosing a seat right beside the floor to ceiling glass windows at the front of the shop – so all the normal people on the way to work could watch him hoe into a Pad Thai with duck at twenty past ten in the morning.

“They’re all wishing they were me,” said the 23-year-old.

“Feeling young, wild and debt-free. Planning my next holiday. Those are all the things I would be doing if I hadn’t given up on life. Like fuck, I’m even washing this greasy shit down with a fat coke,”

“If I had any dignity or vanity left in my soul, I’ve gotten a long black and a bacon and egg roll. Then eaten it in the comfort of my shared living room.”

Martin confided in The Advocate, saying that the slippery slope that led him to give up on his life began when is ex-girlfriend started letting him smoke in bed.

He’d even moved his bed up against the window so he could ash out of it, which was when Maxine said enough was enough.

“It really is the pinnacle of relaxation, smoking in bed,” he said.

“But when Maxine got a real job, she grew up really fast. Suddenly having Thai for breakfast, smoking in bed and doing ketamine on a Tuesday night is unacceptable and immature,”

“She knew Tuesdays are my only night off.”