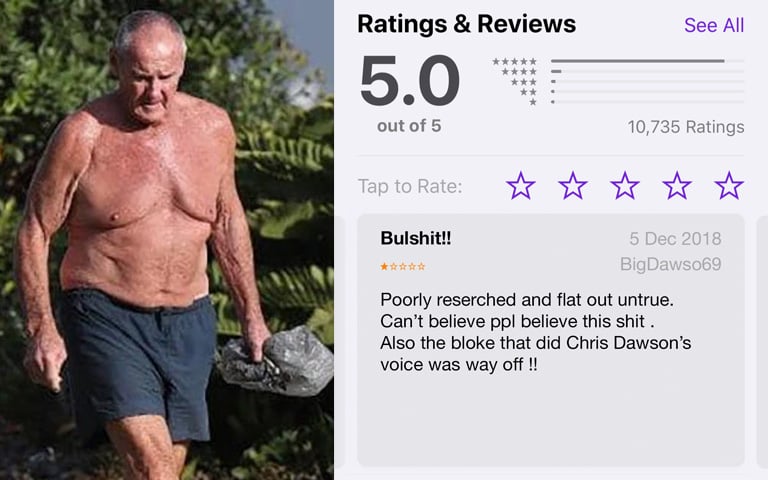 Alleged murderer and former Newtown Jets player Chris Dawson has reportedly taken the time to leave a scathing review of the Walkley award-winning Teacher’s Pet Podcast today, before being arrested for his crimes that it brought to light.

Mr Dawson, who was the subject of the Australian True Crime podcast called The Teacher’s Pet, was taken by Queensland police officers at a home on the Gold Coast today, at the request of New South Wales Police.

However, before being taken in it is believed Dawson made a point of reviewing the podcast, where he criticised the accuracy of the allegations made within it about his role in the alleged death of his missing wife.

The 70-year-old is expected to be charged with the murder of his wife Lynette Dawson, who disappeared from Sydney’s Northern Beaches in 1982. Her body has never been found.

When asked for comment about the podcast prior to his arrest, Dawson was only willing to criticise how the voice over artist that was used to re-enact his police interviews didn’t sound anything like him.

Writing under the pseudonym of BigDawso69, the former fullback stated that he thought the podcast series was ‘bulshit!’.

“Poorly reserched and flat out untrue. Can’t believe ppl believe this shit . Also the bloke that did Chris Dawson’s voice was way off !!”

However, given the developments in the case in the hours since his review, it appears that Chris Dawson opinions on the Gold Walkley podcast might not be shared by the jury.

To listen to our editors’ interview with the investigative reporter behind the interview, go here: