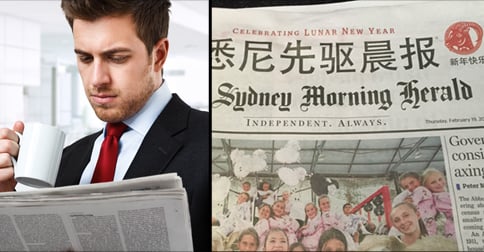 Residents of Australia’s largest city and the surrounding, less important, regional areas – are today in a state of shock, after being exposed to a cultural shift that many are not ready for.

Feelings of xenophobia and anti-Asian sentiment have once again replaced acceptance and tolerance as Australians panic over what looks to be a new marketing ploy by one of the countries most circulated newspapers – The Sydney Morning Herald.

The front page, which appears to show some sort of Asian writing, has upset many readers – who do not believe they should have to accept any form culture outside of their own.

One reader, Anthony Pyne from Sydney’s north-west, has spoken to the Betoota Advocate this morning about the upset in his community.

“Mate, how many times do we have to say it. If you come here, speak the language,”

“We are not going to bow to some tyrannical Asian empire that keeps forcing all their shit on to us” says a noticeable angry Pyne.

“My ancestors worked hard to make sure that English was the only language spoken in this country. Even if it meant crushing the cultural traditions of over 600 Indigenous nations – we worked hard for it”

It would seem Mr Pyne and his family aren’t the only ones upset about today’s front page.

Thousands of Australians have rallied together this morning on social media through the hashtag #SpeakOurLangage – with many vowing to boycott the Sydney Morning Herald until the “Asian stuff” is taken off the front page.

One angry social media user has come out swinging on a new page dedicated to the movement.

“I won’t be reading the newspaper agen until they take the Asian shit off it. I’ll stop reading news full stop, or even worse… i’ll start reading the telegraph”

Another user was quick to snub any rumours surrounding racism, explaining that it was more about a lack of gratitude from Chinese-Australians.

“Don’t get me rong. I’ve got plenty of Asian frends and that… I love mongolion lamb and stuff and I always celebrate chinese new year with the fireworks – but this is a bloody DisgAce! This is Australia not Australiasia! – Love it or leave it!!”

It seems this campaign could be yet another upset for the Herald’s owner Fairfax Media Limited, who have been running number two to NewsLimited’s The Daily Telegraph for some time now.

One spokesperson for The Sydney Morning Herald has spoken up about this morning’s controversy.

“Please. I ask everyone to remain calm, this is a one-off edition celebrating what is formally known as Chinese New Year,”

“We have done this before and it has never been a problem until now. Australia is home to many different cultures and we like to acknowledge as many as we can”

“Don’t you ever compare us to other Fairfax properties. We are not the 2UE of print journalism. We are stronger than ever.”