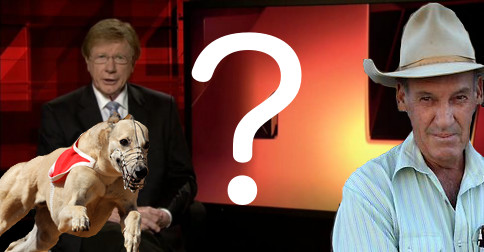 THE PRODUCERS from ABC’s Four Corners are have revealed that they’re unsure which industry they’d like to derail next.

Earlier this week, the news and current affairs programme aired a story which exposed systematic and brutal cruelty within Australia’s greyhound racing community – which has led to widespread condemnation by both animals rights groups and the public.

The report on live-bating in the greyhound racing scene is expected to trigger a knee-jerk reaction by the government, which will more than likely result in a band-aid solution that appeases the public’s pleas for something to be done.

The Walkley-baiting Four Corners exposé on the abhorrent treatment of Australian cattle in an Indonesian “abattoir” in 2011, forced the Gillard government to effectively wiped-out the entire live export trade between Australia and Indonesia – crippling cattle producers in the northern half of the country.

Jack Verner is the director of the Western Australia Cattleman’s Association.

“When will those shiraz-sucking, stubble-bearded, socialist fuckwits in Ultimo learn that their actions have consequences?”

“It’s like we’re dealing with a bunch of children. They just don’t understand. They fucked our industry right up… and now they’re gonna do the same to the greyhound community,”

In the years leading up to the live export ban, over 90% of all cattle in northern Australia were destined to spent their twilight months at Indonesian feedlots.

Nonetheless, the live export ban turned an entire industry on its head overnight, which drastically affected the lives of hundreds of thousands – a phenomenon yet to be seen in greyhound racing as their community begins to implode.

Media commentators and analysts have speculated since Tuesday morning about which industry will be the next to fall in to the ABC’s crosshairs.

Many have suggested that the next head on the chopping block will be the polo associations – which have been known to ride horses with such gusto and vitality that the ponies themselves begin to sweat profusely and pant rapidly.

Polo also lands within two of the ABC’s most popular targets – the wealthy and animal cruelty.

“We’re excited to see what the future holds for us.” said one producer.