[dropcap]T[/dropcap]he Australian Government today announced a 100-year economic model that shows a considerable reduction in the costs of global detention, as well as a humane solution for the hordes currently fleeing war and danger. Announcing a new Government department dedicated to finding solutions for an increasing stateless population, the PM fronted a press conference this morning to discuss the countries new “plan of attack” for the current Syrian refugee crisis.

“The magnitude and complexity of the issues arising from the flow of asylum seekers and refugees, globally, poses huge challenges for the world’s destination countries, including Australia,”

Offering nothing short of the grim and honest truth, Mr Abbott straightened one of the eight Australian flags positioned behind him and began delving into what has been described as “Australia’s humanitarian triumph” – in the wake of the current Syrian refugee crisis.

“Currently asylum seekers from around the world live with little hope of finding a solution to their plight, with opportunities for resettlement only benefitting a small number of refugees,”

“We have a solution to this, we might not be able to save all at once… But we are heading towards a 100-year economic plan that will see Australia processing and replacing every single stateless human on this planet,”

Due to this absence of durable solutions for asylum seekers, Australia has made the move to provide care and protection for the world’s refugee population with a bold and revolutionary system that streamlines the processing and housing of refugees while their claims for resettlement and asylum are assessed. 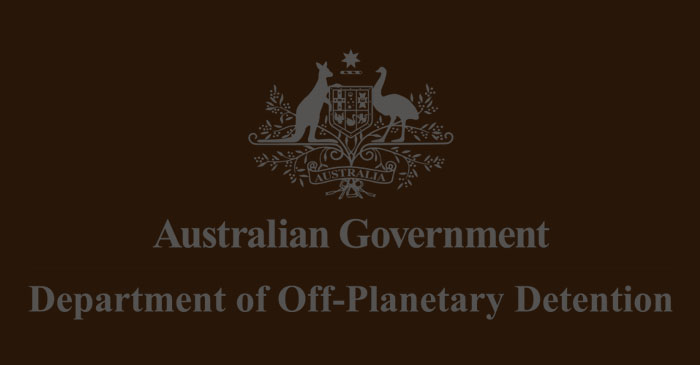 “Off-planetary detention offers a safe, efficient and humanitarian alternative for the world’s displaced and endangered people, completely removing the person from any threat of persecution into an absolutely safe environment.”

“It protects Australian citizens, and it protects asylum seekers. It’s a win-win situation because neither party will have to live side by side, at any point,”

Mr Abbott went on to describe the thinking behind the newly announced Department Of Off-Planetary Detention, an off-shoot of the Australian Civil Military Centre.

“Outer space is the final, truly war-free sanctuary where asylum seekers will be able to have their applications processed. It’s an atmosphere void of persecution or conflict,”

A process that has been given the thumbs up by a range of Western destination nations around the globe, international centres will send asylum seekers to the central processing centre at Sydney’s Cockatoo Island, where they will be launched into orbit and housed securely until their applications can be processed.

“This system provides a global solution for housing asylum seekers and is at the forefront of humanitarian aid,” said Mr Abbott.

“It is an example of Australian putting their hands up and saying, ‘we will deal with these people’ – while at the same time, creating jobs and tourism for our own,”

“I know I’ll be down there on the harbour when the first rocket takes off.”