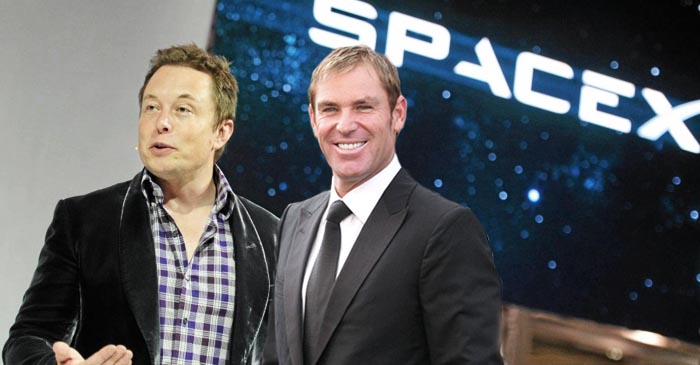 [dropcap]T[/dropcap]HE WORLD’S GREATEST cricketer and a pioneering space entrepreneur Elon Musk are joining forces to do something truely great for mankind. Australian bowler Shane Warne is set to become the first person in history to bowl a leg break in space. Coincidently, the 46-year-old will become the world’s fastest bowler as the delivery will continue to gain speed as it drifts off in to outer space.

Mr Warne agrees that for a young fresh-faced footballer from Gumtree Valley, he’s done some genuinely colossal things in his life.

“This is going to be better than having Boonie at short leg on Day 3 of a Sydney test,” said Warne. “First playing cricket for Australia, then Liz Hurley now going to outer space. Giddyup.”

The extra-terrestrial stunt is being hailed as a global event, which organisers hope will unite the people of Earth – doing more for international relations than a week long summit ever could. As a part of Musk’s SpaceX program, delegates have been sent from around the cricketing world to see Warne off. Speaking from the heart, Musk said that this latest project was more about passion, than it ever was about technology.

“I want to highlight how easy it is for me to send things like Shane Warne into space,” said Musk. “We designed a special Turf King for the mission, as the ball itself will need to stand up to everything space is going to throw at it.”

After Warne bowls his historic space leg break, it will continue to spin and travel through the endless vacuum of the universe indefinitely. As it leaves the gravitational pull of our Earth and Moon, the delivery is projected to be travelling at over 7.66 kilometres per second or about 28000 kph. That’s almost 175 times faster than the current quickest delivery, a record set by a morbidly hungover Jeff Thompson on a boiling hot day in Perth back in 1976.

“He’s going to be getting a good ribbing over that,” said Warne. “Stick that one up ya, Thommo.”