A local teen has today been completely rejuvenated after seeing a movie at the cinema, it’s reported.

Alicia Barrett [19] is alleged to have seen an action movie with her mates after school, which starred some pretty kickass female characters.

Having not yet developed a sense of self and still at an age where she was heavily influenced, Alicia has been keen to latch on to any personality trait she deemed cool. A strange habit that saw her regularly shifting from wise cracking goofball one week, and a mysterious loner the next – such as the time she acted moody and mercurial for a whole month after binging the entire Twilight series.

Though watching movies from the comfort of her own home provided enough fuel for an identity crisis, there was just something extra powerful about being in the immersive realm of a cinema. Whether it was the enveloping darkness or the knowledge she was surrounded by people who know nothing about her, Alyssa felt a surge of inspiration as her mind found a new fantastical narrative to take hold of.

Exiting the dark cinema room like a butterfly emerging from a chrysalis, Alicia Barrett is a force to be reckoned with…a feeling that will last for approximately four hours, before she randomly decides she wants to be a whimsical free spirit instead. 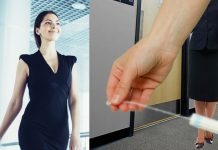