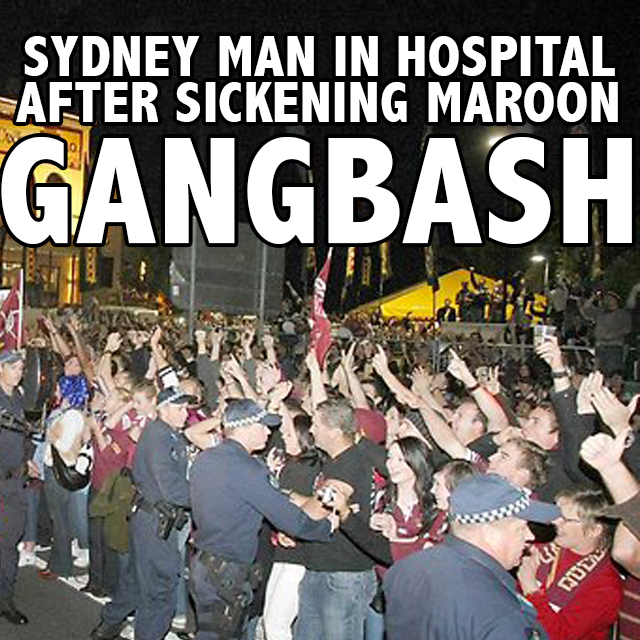 A NEW SOUTH WALES-BASED sales manager remains in a Brisbane hospital today, recovering from injuries sustained while “being a smart-arse” in a Caxton Street hotel on Sunday afternoon.

Harrison Grogan, 28, was invited to Brisbane as a guest speaker for a media sales seminar this week – before opting to check out one of the city’s most famous pub districts.

From his bed in the Royal Hospital, Mr Grogan spoke to The Advocate about how his sunday session went sour.

“I’ve been to Bris-Vegas before, but only for work,” he says.

“This time I had a day to myself – to explore the sights before flying back on Monday. So of course I headed to Caxton Street to see the statues and check out the pubs.”

Grogan says that his relaxing afternoon soon became quite a traumatic experience, as he was met with extreme hostility from a group of “4 to 5” locals.

“I was just having a yarn with the local boys at one of the old pubs… but they didn’t want a bar of me. So I kept talking to see if I could win them over,”

“Next thing I know it’s a full blown punch-on. I held my own for a while there, but I ended up spread over the bar with six of them laying into me with pool sticks. It was out of no where”

However, it would seem the “smug” southerner’s claims of innocence might not match up to recounts given by witnesses.

Setefano Toomua, the security guard who hesitantly broke up the melee, has also spoken out.

“Bro, he was definitely asking for it,” says the Caxton Street bouncer and former Wynnum Seagulls back rower.

“He must have left his manners back in Bondi. First of all he was throwing his credit card around and talking about how much he had earned during his visit. He kept referring to Brisbane as “Bris-Vegas,”

“Then he started poking fun at the Queensland memorabilia on the walls. He started banging on about last year’s State Of Origin. That’s when I knew he was going to get it,”

Both security and the hotel publican say that they did not want to see Mr Grogan fall victim to such a brutal “hiding” – however they became indifferent to the man’s safety when he went on to speak ill of the recently deceased Queensland rugby league icon, Artie Beetson.

“He started getting real lippy. He was saying how Artie only ever played footy for Sydney clubs and thought it was hilarious that Brisbane tried to claim him as one of our own,”

“He said the statue of Artie was a joke”

Local police were eventually called to the scene but no charges were laid, due to the fact that several of the aggressors were former-Brisbane Broncos footballers.

“Several of the men in question were responsible for premierships in both 1997 and 1998. You’ve got fucking rocks in your head if you think we are going to arrest those blokes” says Milton Police Sergeant, Alfie Lewis.

“This happens quite often. Most of the time we find that the “victims” are actually just smug Sydney wankers running their mouths. We don’t know why they think they can act this way. Particularly with Origin heating up”