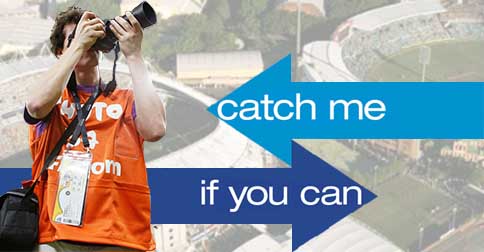 A CREATIVE PADDINGTON man has found a genius way to attended matches at Sydney’s most prestigious sporting complex without paying a cent – for over two decades.

He’s not a professional athlete, nor is he affiliated with any sporting club.

None of his friends are members, either.

If you ask him, he’ll tell you he’s a reputable journalist – but he’s never written an article or taken a photograph.

Staff at the Sydney Cricket Grounds Trust know him as JP, or Jean-Paul – A French-Canadian sports journalist based in Sydney’s East.

The Advocate’s editor-at-large, Errol Parker caught up with JP at his local watering hole in South Paddington earlier today.

EP: From what you’ve told me off the record, you don’t work professionally as a journalist?

JP: No. I’ve never worked in the media before.

EP: Then can you tell me how you were able to get media accreditation for the SCG and Allianz Stadium?

EP: Right, so you’d approach the Waratahs for example and Cricket Australia for a media pass?

EP: So you were able to trick them in to thinking you were a sports journalist?

EP: That’s extraordinary. No really, it is. Can you tell us how you did it?

JP: Well, things were a lot easier before 9/11. The first thing I tried was making up my own fake media passes. After attending a few matches, I was able to get a few good photos of the passes themselves. I took them back home with me and I did a crude mockup on the computer.

EP: So kind of like a modern day Catch Me If You Can type scenario then?

JP: Kind of. The most important thing is when you’re trying to pull one off is confidence. If you can convince yourself that you belong in that media scrum, then the whole thing gets a lot easier.

EP: And the French-Canadian thing?

JP: Ah yes. That was the stroke of genius that tied the thing together. You see, I took French class in high school and at university so I’m somewhat conversational. Not bad for a bloke from Casino [laughs].

JP: Yeah, I could pass as a French-Canadian. They can’t speak French or English properly so I had both bases covered [laughs].

EP: So from there, you’d just make up a new pass each year and walk right through the gates?

JP: Pretty much. I got to know everybody before they really had to clamp down on security. The Trust started loosening their membership criteria and before long so it became increasingly easier to blend in with the crowd – as now most of them are either Catholic or attended public school.

EP: Why is it easier to blend in with Catholics and public school alumni?

JP: I used to have to wear a tie and avoid the ground security like the ATO but now they’re so preoccupied keeping these people in line that I can relax a bit now.

EP: So run us through your day when you’re planning to sneak in to a match at Allianz Stadium.

JP: Well I get home from my other job, which I can’t tell you about, and unwind for an hour or two and watch the news. It’s easier to get through the media gate when it’s busy – which is about half an hour before kick off. I like to touch base with the other “journalists” as I’m walking up to the gate, to give the illusion that I’m supposed to be there. Just making small talk with them, you know, shoot the shit. Then when I actually get to the gate, I nonchalantly offer up my “press pass” while still trying to keep up a conversation with who ever I’m try to walk in with.

EP: So, in a way, it’s like trying to get in to a nightclub with a bunch of girls because you know the bouncer will be more inclined to let you in?

EP: So what do you do once you’re in?

JP: First things first. One bloke to avoid is old Chris “Buddha” Handy, because he’s bludged more cigarettes from me than an unemployed housemate. Then it’s off through the tunnel and on to the ground. From there I usually just try to get comfortable and watch the game.

EP: Do you even know how to use a camera?

JP: Not really, I just hold it up to my face and play with the knobs now and then.

EP: OK. So why have you chosen to speak to the media now? Are you getting out of the game?

JP: Yeah I think it’s time for me to hang up my media passes. I’ve had a good run and I don’t really feel like being caught so I’m bowing out at the top of my game.

JP: The Waratahs, mate. I can’t be fucked to get down there now and jump through all the hoops to watch them suck ass all night. I’m sick of it now.

EP: Well. I guess that’s a good enough reason. Thank you for your time today, JP.

JP: No problem mate. Any time.

With additional reporting from Helen Burger from Honi Soit.