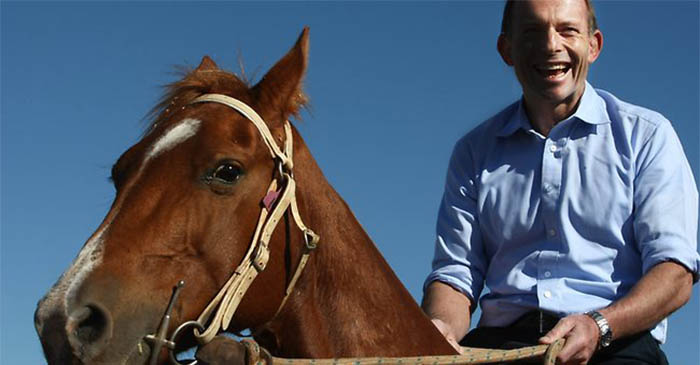 [dropcap]L[/dropcap]IKE MANY DIRECTIONLESS young people, former PM Tony Abbott is considering taking an extended break, or a “gap year” on a working cattle station in northern Australia. His former friend turned casual acquaintance James Packer did something similar when he was 19, as his father Kerry sent him “up north” for being an entitled little private school cunt – something he hoped the Territory would straighten out. And it did.

After being publically embarrassed and had his life’s work dragged through the mud, Tony Abbott says he needs a fresh start.

“Look, I, ah, don’t really know where to start,” said Mr Abbott from his peasant-style brick home on Sydney’s upper north shore. “I’m looking at heading up to the gulf country, maybe even the Kimberly. Who knows at this stage. All I know is that I can’t stay at home – it’s driving me up the wall.”

“I’d give him a go, I give everybody a go,” said Mr Pearson. “But listen, joog. I’d let that bastard know directly if he was pulling his weight. By God I would bunge.”

In 2009, the Australian Bureau of Statistics found that 1 in 4 Australians is friendly with a person from Sydney’s North Shore that claims to know how to ride a horse. As Mr Abbott falls into that category, he’s already informed his prospective employers that he can handle any horse – from a wild Channel Country brumby to a Carlton United Clydesdale.

Mr Abbott knows full well that wearing a helmet while riding a horse on a cattle station is social suicide.

“Christopher Pine is the type of bloke who’d wear a helmet on a horse.”