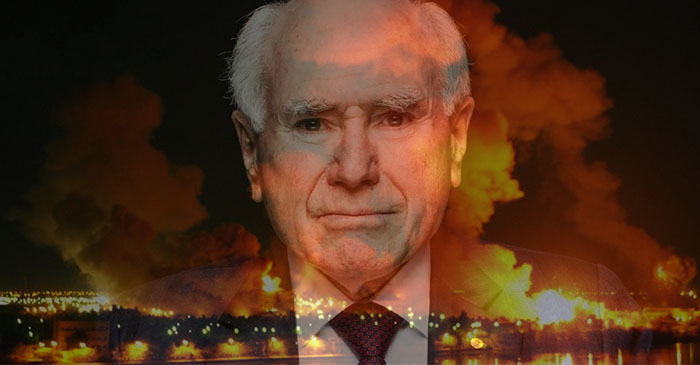 GEORGE W. BUSH AND TONY BLAIR were the ones who wanted to topple the Saddam Hussien regime, John Howard just happened to be there at the time.

That’s the message from Gen Y’s most beloved former prime minister today, as he defended his involved in the 2003 invasion of Iraq.

John Howard has spent his been under the public spotlight in the wake of this year’s election, but now he feels that he needs to retreat back into the shadows once again.

“I, like Ms Wran, were party to an incredibly diffuclt decision,” said Howard.

“I ended up making the most difficult decision of my policial life, one that’s still with me all these years later. A keen-eared political junkie would’ve picked up that I said the same thing regarding my firearms reform in the wake of Orlando, but we’re passed that now,”

“But yeah. Bush and Blair pretty much got in my ear about Saddam, then we all agreed to go ham on him. But they did most of the etch shit, like blow up civillian targets and execute his entire family. We didn’t skirt the law as much.”

The 76-year-old’s honesty is refreshing to many Australians who lived and died in the turbulent post Y2K world, who fondly remember Howard as the nation’s father figure – Kim Beazley with a smaller, but smarter heart.

With additional reporting from The Guardian.