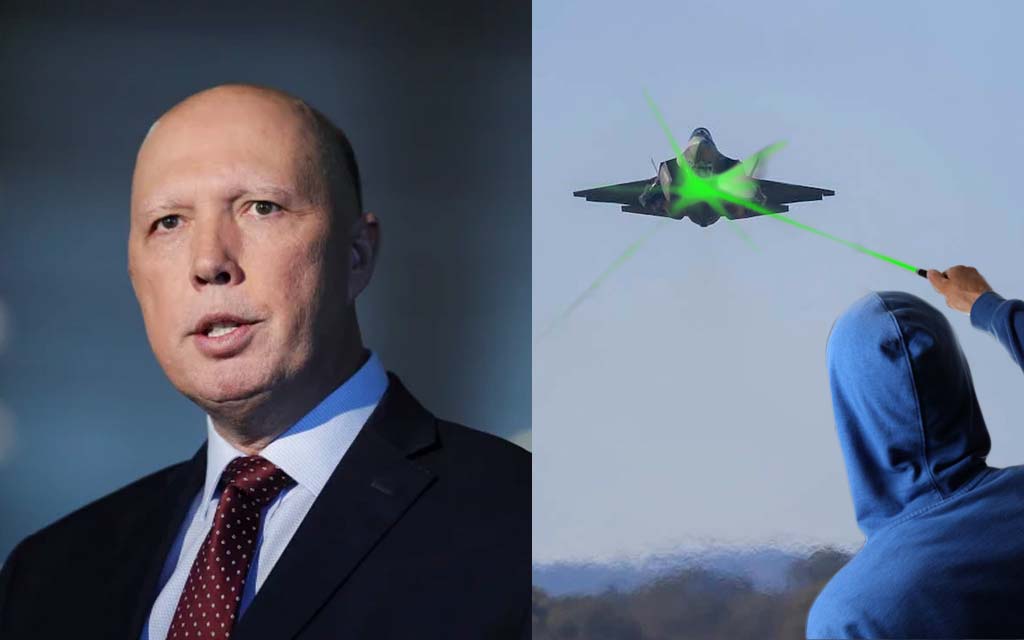 The nation’s Defence Minister has had to consume a little bit of humble pie today.

Peter Dutton has been forced to issue a formal apology to global superpower China, after it was revealed where the source of this alleged laser pointing came from.

This comes after Dutton kicked on with his Peter the Protector for PM campaign over the weekend, where he accused a Chinese vessel of aggressively shining a laser at an Australian aircraft in the Arafura Sea.

Amping up the ‘we are going to war rhetoric,’ Dutton hit the media to reveal the hostile actions by the Chinese military, which he insinuated was close to an act of war by our northern neighbours.

Seemingly under the impression that the nation thinks no one would be able to save us from becoming a Chinese territory but him, Dutton then said the Chinese military needed to be called out for their act of aggression.

However, after openly attacking the Chinese for shining a laser in what seems to be a concerted effort to politicise a national security issue in order to get his dream job, Dutton has had to back track.

“I have since been informed that the laser pointer may have come from domestic shores,” said a humbled Dutton this afternoon.

“ADF intelligence has revealed that the laser pointer actually came from a local teenager from Cairns, who was fucking around the other day.”

“It’s believed the young fella named Chayce picked up the pointer off the internet and had been fooling around when he managed to point it in the direction of one of our aircraft,” he said.

“We are currently in the process of confiscating that laser pointer,” he sighed.

“But, China could still attack us,” he said.

“And only a military strong man who left the cops under dubious circumstances could protect us, so just remember that if anyone from a polling company calls you up,” he finished.