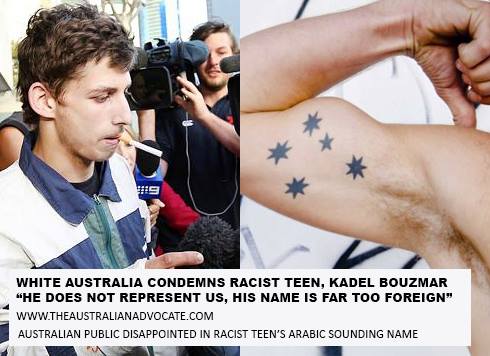 THOUSANDS of Australians have taken to social media this week to condemn the teenager behind a racist attack on a Brisbane train earlier this month.

The public response was subdued when footage first emerged online of an unnamed youth with an Australian accent racially abusing a railway security guard of African appearance, with most regarding the incident as trivial.

However, outrage was sparked when the offending man’s name was revealed as Abdel-Kader Russell-Boumzar, with many citing the seventeen-year-old’s Arabic name in denouncing his racist rant.

“Who does this camel jockey think he is racially abusing people when he’s not even proper Aussie himself?!”, Adam Ricketson wrote.

“If Abdul can’t understand that only white Australians can be racist pieces of shit, he should fuck off back home – learn our culture or leave”, Carlee Granger remarked.

Politicians have supported the public sentiment and even attempted to put a positive spin on the unsavoury incident.

“It’s regrettable that in doing something quintessentially Australian (Russell-Boumzar) has acted in an extremely un-Australian manner by not being white”, Queensland Attorney-General Marianne Blige told a press conference this morning.

“However, it is really heart-warming that a large section of the Australian public have made a strong statement against racism committed by ethnic minorities.”

While praised for his self-control, the victim of this racist attack – security guard Joe Mkhwananzi has also been criticised for not responding with violence in ‘the Australian way’.

In a quote from Queensland Premier Campbell Newman: “Two very un-Australian things happened on that train… Joe should have knocked that stupid prick out. Some call it self-control, I call it being Un-Australian”

“However, we realise that would have resulted in A LOT of paperwork. Both Queensland Rail and myself would like to thank Joe… We thank him for the way he grit his teeth and copped the rubbish chat being thrown by this little germ”

While granting Russell-Boumzar bail to face trial at a later date, Magistrate Ann Dyer also took aim at the 2nd-Generation Australian youth and reflected the public’s outrage by stating “your name doesn’t sound Australian either.”