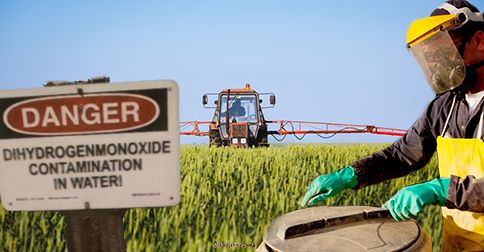 A “CERTIFIED ORGANIC” cropping property near the NSW town of Trangie has come under investigation today after workers were allegedly caught spraying a controlled chemical on crops.

Farmhands working on ‘Eucaronage’ via Gin Gin stand accused of using dihydrogen monoxide to promote plant growth, which is banned by organic certifying bodies around Australia.

It kills thousands of Australians and millions of people around the world each year.

Dihydrogen monoxide (DHMO) is a colourless and odourless chemical compound. Its basis is the highly reactive hydroxyl radical, a species shown to mutate DNA, denature proteins, disrupt cell membranes, and chemically alter critical neurotransmitters. The atomic components of DHMO are found in a number of caustic, explosive and poisonous compounds such as Sulphuric Acid, Nitroglycerine and Ethyl Alcohol.

Over-consumption of DHMO is potentially fatal in human beings and livestock, which lead to the federal government controlling its availability in regional areas.

A spokesperson from the Organic Agricultural Board (OAB) said that while this is a rare case, there hasn’t been any reports of widespread dihydrogen monoxide saturation for many years in the area.

“We make sure that only food grown with natural levels dihydrogen monoxide are certified organic,” said the spokesperson.

“It only become an issue when farmers start directly spraying DHMO on to crops and animals,”

“Livestock who consume excess amounts of DHMO are prone to over-eating and rapid, unsustainable weight gain,”

“In this instance, we were glad to catch these operators before their produce became available to consumers.” she said.

The owners of ‘Eucaronage’ have vehemently denied the allegations, stating that the only DHMO on their Gin Gin property occurs naturally in the environment.

Trace amounts of the possibly harmful substance do occur naturally in regional parts of NSW and Queensland, although in recent years, climatic events such as El Niño and Christmas have seen the deadly DHMO all but disappear.

“For the record, we have not used any banned or controlled chemicals such as DHMO on any of our properties,” said ‘Eucaronage’ manager Gary Hosewell.

“While DHMO is pivotal to having a healthy livestock and crops, too much of it can easily kill them,”

“That’s why we like to leave it up to nature to give just the right amount of DHMO,”

“The claim made by the OAB is baseless.”

Independent investigators are set to reveal their findings to the OAB by the end of the week.