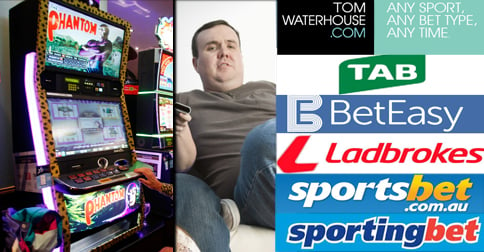 NORTH BETOOTA man, Rick Comino, says that he is a man of many vices, but poker machines are not one of them.

“I used to play the things when I was younger, but it didn’t take long for me to realise that they are rigged for you to lose,”

Rick, a sub-contracted plumber and junior rugby league coach, is just one of many gambling enthusiasts who claims to have seen the light.

“Yeah, I don’t mind a punt here and there. At least with a horse-race you know there is always going to be a winner. I only ever bet smart,”

In March last year, the Australian Senate voted to overturn the watered-down poker machine reforms passed by Labor after a bitter stoush with crossbencher Andrew Wilkie who had demanded the introduction of pre-commitment technology for gamblers.

The Coalition legislation which passed the upper house repealed a trial scheme of mandatory pre-commitment technology, as well as abolishing the national gambling regulator, and removing capped ATM withdrawals at gaming venues.

“If the government thinks this bill will make the issue go away, it won’t, because there are literally hundreds of thousands of Australians whose lives had already been devastated by poker machine addition.”

But it seems the tides are beginning to turn on what has been described as a “catastrophic poker machine culture” in Australia’s pubs and clubs.

Rick Comino claims he is just one of many “average punters” who can see the light when it comes to blowing his young family’s income on state-sanctioned gambling industries.

“If you are gonna have a dabble, you are better off having a flirt with a weekly multi-bet… That’s a good place to start. But stay away from those machines, they are no bloody good for anyone,”

“At least with this shit you can make some educated bets. Pokie Machines are just a tax on the stupid.”