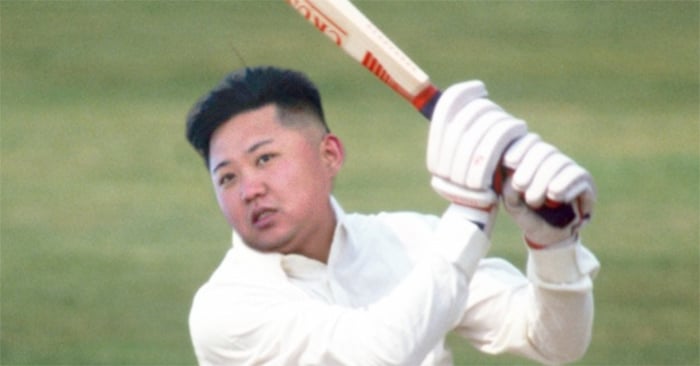 THE SUPREME LEADER of the Democratic People’s Republic of Korea (DPRK) has paved the way for a North Korean victory on day two of their test match against Cuba in Pyongyang yesterday. The 32-year-old scored a quick-fire 807 not out in the last session of the day’s play, putting the Koreans in the drivers seat at 2/1276 overnight.

Prior to his brilliance with the bat, Kim Jong-un took the three key wickets in the Cuban top order. Switching up from his usual slow left-arm chinaman deliveries, the Korean leader brought everything to the table in the first Cuban innings. Halfway through an over, he decided to switch his bowling arm. The bold move paid off for Kim, as his leg-spin proved to be as effective as his left-armed bowling.

Nobody in the Cuban team was able to pick his wrong-uns, cementing Jong-un as one of the most talented spin bowlers in the world today. The Cuban captain himself said, after being bowled around his legs by a magical leg break delivery that drifted and turned hard out of the rough, that the world leader was a force to be reckoned with in world cricket.

“He bowls like the best and bats like he’s the Bradmon [sic],” said Cuban captain Javier Ojeda Ortiz. “He chooses good areas with the ball and hit us all over the park. True Bradmon.”

Speaking from the DPRK change rooms, Kim was buoyed by his team’s success against a tough outfit, but was quick to quell any suggestion that he was the standout.

“I was just lucky on the day,” said Jong-un. “My encyclopaedic knowledge of the Cuban weaknesses came to fruition. I’d like to thank my lieutenants for bowling to me in the nets all week. Very subtle game of cricket.”

“As all my countrymen know, Cuba are the best cricketing nation in the world. We are hoping to finish this job in time for me to take a Concorde to London and help our rugby side take home the Web-Ellis”

The Koreans resume tomorrow on 2/1276 with the Cubans staring down the daunting task of chasing down a projected total of  27800 runs before Friday.