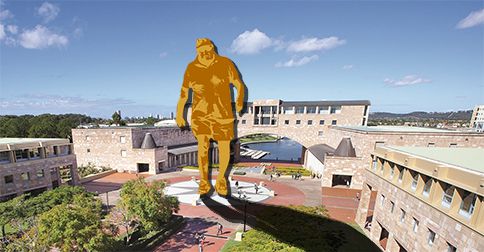 The plans have been met with harsh criticism by both locals and the Queensland state government, with legal proceedings due to start early next month.

The University was established in 1987 and its development funded via a joint venture between Bond Corporation in Australia and the Japanese entity, EIE, at the initiative of the convicted corporate criminal.

Professor Kim Nugent forwarded the motion in a meeting today, which was carried unopposed by his colleagues.

“Without Bondy, we’d all be working at James Cook University – or god-forbid, Southern Cross,” he said.

“He was a larger than life character, so we’re planning to build the largest free-standing statue in Australia to remember him,”

“You’ll be able to see Bondy from all over the campus – everybody will remember him. He will not be forgotten.”

Unfortunately, the university’s small socialist society has lashed out at the plans to commemorate the great man, saying it’s testament to building a statue in honour of Ned Kelly, a fellow petty criminal.

“The man was a greedy prick, and that was proven in a court of law,” said society president Blair Stamp.

“It’s just gross. You’d be better off remembering the pristine swampland this university was built on,”

“Now that Alan is dead, perhaps we can move on with our lives here.”

The project has been put to tender, with many interested clients throwing their hat in the ring to build the project.

Work is expected to begin before the end of 2024.