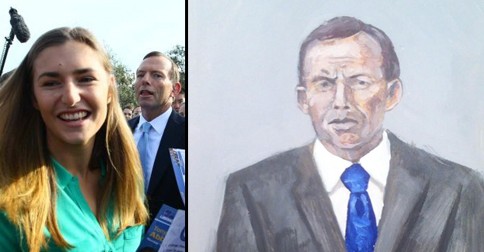 A late entry into this year’s Archibald Prize has left judges stunned, as the daughter of Australian Prime Minister Tony Abbott submits the first official portrait of her father.

According to the Herald, it has been revealed that the trustee board of the famous art prize made an exception to all submission deadlines, due to the young creative designer’s inability make the friday entry date.

In it’s 94th year, the Archibald Prize is touted as one of the most prestigious art prizes in the country – with approximately 800 entrants each year submitting portraits-of-photographs of B-list Australian actors, other artists, and moderately well-known Labor politicians.

According to her Instagram page, Frances Abbott submitted the first official portrait of her father at approximately 15:00pm yesterday afternoon. At least 72 hours after entries closed to the public. Shortly after, it was revealed that the 22-year-old had been listed as a finalist.

“I am so honoured to join the ranks of Ben Quilty and Tim Storrier as a finalist in the Archibald. This has has been a dream of mine for several years now,” said an ecstatic Frances Abbott, who lists both Quilty and Storrier as inspiration, as well as 2014 finalist – Anh Do.

According to the Gallery of NSW spokesperson, Angus Capon, certain exceptions were made for Frances Abbott – due to her father’s close relationship with several members of the trustee board.

Frances Abbott, used to seeing her father in the spotlight, found herself the centre of a major news story last year when it was leaked that she had been awarded a $60,000 scholarship to study at the exclusive Whitehouse Institute of Design in 2011.

The 21-year-old student who accessed the school’s database and leaked the information to the New Matilda was handed a two-year good behaviour bond but didn’t have a conviction recorded again her name. Les Taylor, the chairman of the institute, was a long time friend and supporter of Mr Abbott.

The artistic community of Sydney is in uproar today, with many drawing parallels between the Whitehouse saga and the nepotism shown towards Frances Abbott’s Archibald submission.

Angus Capon has addressed all claims in an official press release today.

“This may look like nepotism, cronyism or even favouritism. However, it was a lovely portrait and after taking an official phone call from the Prime Minister himself, we were very excited to play host to the first official portrait of Tony Abbott,”

“She is just as credible as any other artist, in fact she has chosen the perfect subject. No one else has been able to sit down and paint Tony Abbott, so I believe she has a good chance at taking this year’s prize”,

“The subject was perfect. Topical, high-profile and able to give us media leverage – that’s really all that matters. Her style speaks for itself.”

With the likes of Anh Do (IGA Ambassador and author) Noah Taylor (Game Of Thrones actor) expected to join Ms Abbott as finalists, the pressure is on for no-name artists to deliver something that can outweigh the reputations of previous Sydney-based winners and obscure celebrities from unrelated fields.