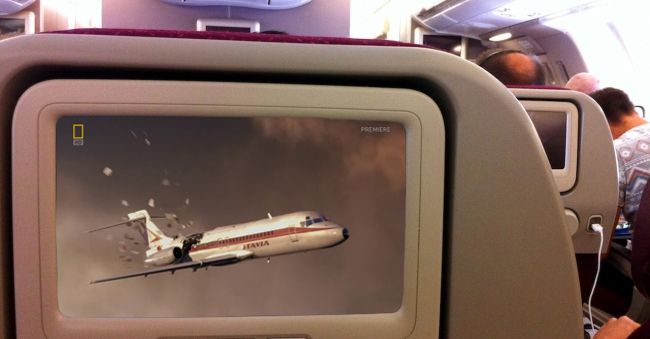 A SOUTHEAST ASIAN airline has come under fire for accidentally broadcasting an episode of Air Crash Investigations during a scheduled flight to Europe.

The carrier, which cannot be named for legal reasons, has been subject to multiple hull losses and near misses in the past 24 months.

This is the latest controversy that the embattled airline has had to deal with as millions of travellers refuse to buy their bargain basement tickets.

One passenger aboard the flight has described the shock and chaos that engulfed the cabin when the infamous program came on.

“Then there were screams after the aeroplane disintegrating on their screens was from the same airline they were flying with,”

“It was absolutely terrifying.” he said.

An official from the airline has refused to comment on the situation, saying that it was “a simple error of judgement”.

It’s understood by aviation authorities that this incident is the latest in a long line of  simple errors in judgement the airline has made in the past.

“This type of thing happens all the time on every airline around the world,” said the official.

“We like to make sure we offer a balance of entertainment options on all our flights,”

“From children’s shows to movies to educational programs such as the one in question.”

There are almost no restrictions on what airlines can broadcasting over their entertainment systems, other than adult programs.

However, after this latest airline gaffe, many in the industry are calling for carriers to screen and censor out programs such as Air Crash Investigation.

As an operations officer with the Civil Aviation Safety Authority (CASA), Brett Mohican said that restrictions need to be put in place.

“It’s like making people in pubs watch programs with domestic violence, vomiting and bad decisions in them,”

“Sheer idiocy. But I’m not surprised.”