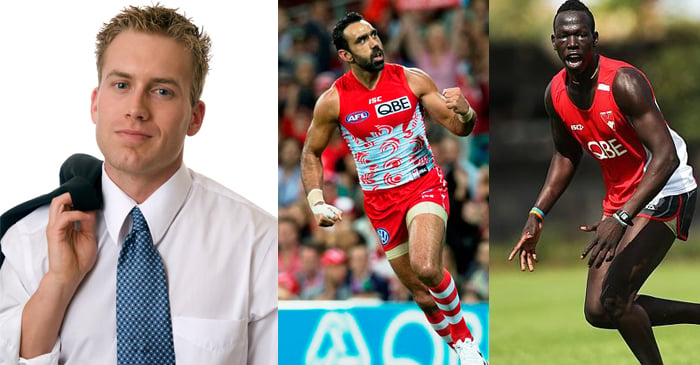 Caroline Springs resident, Alf Garnett, is predicting big things for Sydney Swan’s Sudanese born recruit Aliir Aliir, after a recent eye catching display in the Swans defence.
According to Alf, Aliir Aliir has ‘got the skills and looks like he could have a long future in the game.”
“He reminds me heaps of a young Adam Goodes. Just that natural ability, he’s definitely got what it takes to keep impressing,”
“He just needs to remember where he stands in our game”.
The 32-year-old printing sales magnate points out that Adam Goodes was quick to get the punters offside last year when he decided to hijack the AFL’s Indigenous round with a form of cultural ceremony that is not considered very ‘Victorian’.
Garnett says he would hate to see the same thing happen to Aliir Aliir, but insists that he and his mates will be ready when it happens.
“As soon as he starts to forget his place we’ll be all over him like Eddie McGuire on a butter chicken,’
“The game isn’t about that kind of stuff… Goodesy couldn’t see that and I hope Aliir can,”
Garnett says that the entire Adam-Goodes-Booing-saga could have been easily avoided if he and his mates had let that cocky little Noongar know the score in his early day
“With Goodsey, we just didn’t get started early enough”
“His career was almost over. But with this Aliir, he’s just getting started. I reckon we could get a good fifteen years of torment into this prick,”
“Start ’em early. So they focus on the game.”